In September and October this year, the relics of St. Bernadette will journey on pilgrimage through England, Scotland and Wales. St. Bernadette’s relics will be visiting Clifton Cathedral on Saturday 10th September 2022 for one day. This will be a unique opportunity to experience the special gifts and charisms of Lourdes.

Please join us for this special experience, when pilgrims will be able to join us for Mass with anointing of the sick, Torchlight procession, Rosary, and the opportunity to venerate these relics of “The Saint of Lourdes”. The programme for Saturday 10 September is:

The Importance of Relics

A Relic is a part of the physical remains of a saint after their death, or an object which has been in contact with their body. Relics are venerated to honour the holiness of God.

Why are St Bernadette’s relics journeying to us?

Travelling on pilgrimage enables us to enrich and renew ourselves spiritually, connecting ourselves to God by removing us from the routines of daily life. The Covid-19 pandemic made it difficult, if not impossible, for people to travel nationally and internationally, reducing the number of individuals and groups able to journey on pilgrimage to Lourdes.

Between September and October 2022 St Bernadette will journey to us, making the grace of pilgrimage available to people across England, Wales, and Scotland, and offering an important opportunity to those who might not have been able to travel on pilgrimage otherwise. We can expect many graces from this visit including healing, conversion and the wonderful discovery of vocation. 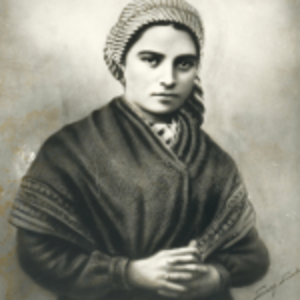 St Bernadette was born in 1844 in a small town in France. Bernadette Soubirous was one of eight children born into a very poor family. Although initially unremarkable, Bernadette’s life was to inspire generations of people to journey in faith on pilgrimage to Lourdes.

Between 11 February and 16 July 1858, Bernadette saw the Virgin Mary eighteen times in a series of Apparitions that took place in cave on the outskirts of Lourdes, a place now known as the Grotto of Massabielle. In the course of these miraculous encounters, Bernadette, then aged just 14, became the friend and confidante of Our Lady, the mother of Jesus.

The Apparitions of Lourdes were authenticated in 1866 by the Bishop of Tarbes. In that same year, Bernadette left Lourdes to live out her religious vocation within the community of the Sisters of Charity of Nevers. She died in 1879, was proclaimed blessed in 1925, and a became a saint in 1933.

The apparitions seen by St Bernadette took place over five months largely in silence. Despite this, over the course of time, an intimate relationship of trust, obedience, and love developed between Our Lady and Bernadette.

The first seven apparitions mark a period of joyful discovery

Bernadette was always deeply happy; this was reflected during the first seven apparitions with her face radiating joy and light.

Apparitions eight to twelve were penitential

At this point everything changed, Bernadette became sad, and sorrowful. Witnesses at the Grotto, who were growing in number every day, were deeply moved and experienced a range of emotions; some were converted to the Faith, others didn’t understand Bernadette’s behaviour and felt confusion or distain.

During this Apparition, Mary spoke to Bernadette saying: “Tell the priests that people should come here in procession and build a chapel here.” Chapels were later built to accommodate great numbers of pilgrims.

Today, the Catholic Church recognises 70 miracles as a result of the intercession of Our Lady of Lourdes, with people across the world journeying in prayer with Our Lady and St Bernadette, on pilgrimage to the Sanctuary.