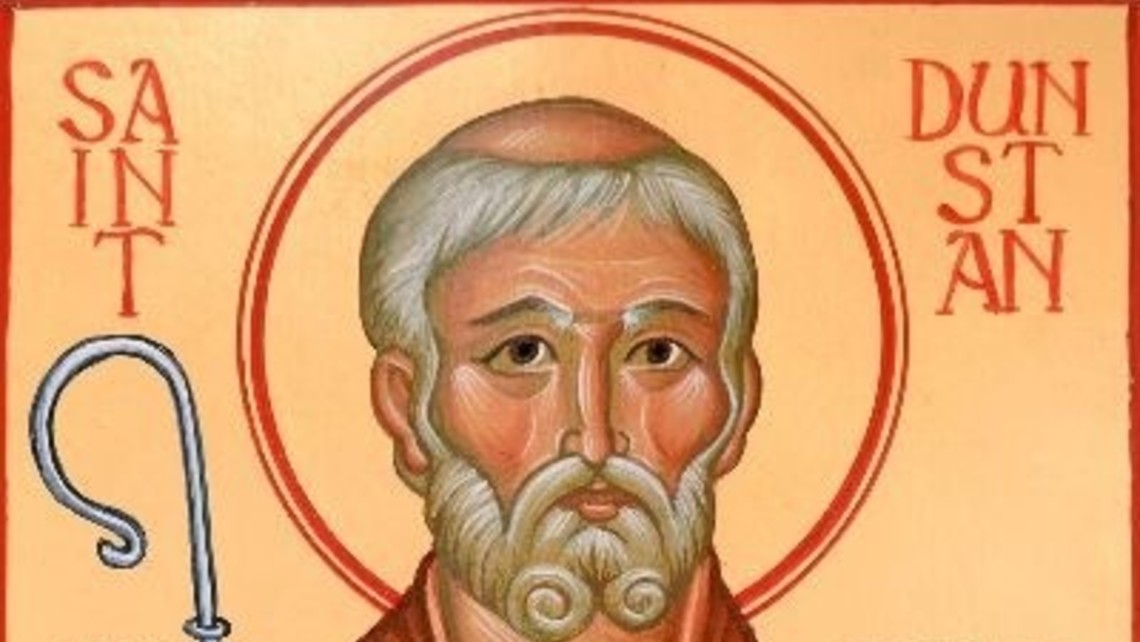 Saint Dunstan was born in Glastonbury, England into a noble family. He was educated by the Irish monks and sent to the court of King Athelstan at a young age. He eventually became a Benedictine monk and a priest being ordained by his uncle, Saint Alphege, the bishop of Winchester.

Saint Dunstan’s quiet life as a monk didn’t last very long as he was called by King Edmund to be abbot of Glastonbury Abbey. There he developed the abbey into a center of learning. At the death of King Edmund, Dunstan entered the service of King Edred and proceeded to reform all of the monasteries in Edred’s realm. When Edwy succeeded his uncle King Edred, Saint Dunstan called him out on his immoral life, and Edwy banished him from the realm. Edwy, in turn, was ousted by a rebellion and was replaced by his brother Edgar who appointed Saint Dunstan as Bishop of Worcester and London, and then as Archbishop pf Canterbury. Saint Dunstan was made a legate by Pope John XII and, with the help of Saint Ethelwold and Saint Oswald, continued the reform of both the Church and the state.

Saint Dunstan’s political influenced soon diminished and he retired to Canterbury to teach at the Canterbury school.

Saint Dunstan was a noted musician who both played the harp and composed several hymns. His most notable composition as the Kyrie Rex splendens. He was also a metal worker, and he illuminated manuscripts.

Ecclesiastical and civil positions of power and the life of a monk often have little in common, but sometimes a person is called to serve in situations that don’t always respect one’s chosen lifestyle. The call to serve can involve great sacrifice. But the Lord rewards generosity and the willing heart.

Saint Dunstan is the Patron Saint of:

Cardinal Nichols: Now is the time for the phased reopening of churches

In his homily for Pentecost Sunday, Cardinal Vincent Nichols questions why churches have not been allowed to open for private prayer, especially when... END_OF_DOCUMENT_TOKEN_TO_BE_REPLACED

Saint Boniface, known as the apostle of the Germans, was an English... END_OF_DOCUMENT_TOKEN_TO_BE_REPLACED