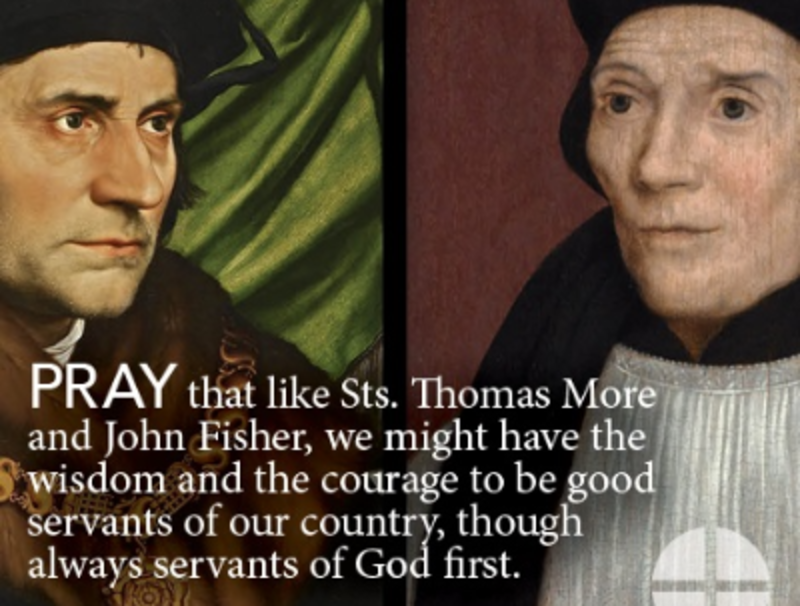 The lives of St. Thomas More and St. John Fisher are very closely linked, and thus it is quite appropriate that the Church celebrate their feasts together.

They are both renowned Englishmen martyred within two weeks of each other for the same cause of defending religious liberty, the sanctity of marriage and Papal authority against State usurpation. They were both associates of King Henry VIII before his apostasy, and it was at his hands that they both suffered martyrdom.

Sir Thomas More was a distinguished statesman in the English Parliament. First and foremost, however, he was a faithful Catholic, a loving husband, and a devoted father. More was widely known for his “unfailing moral integrity, sharpness of mind, his open and humorous character, and his extraordinary learning." He was a close friend and confidant of Henry VIII, and the King himself eventually promoted Thomas to the prominent office of Lord Chancellor.

However, the two were alienated when Thomas refused to compromise his conscience and faith when Henry openly defied Church teachings and divorced his wife to marry Anne Boleyn, choosing instead to renounce the King’s friendship, his own public career, wealth and worldly prestige. Thomas was consequently imprisoned in the Tower of London and eventually condemned and beheaded on July 6, 1535. He was named patron saint of statesmen and politicians by Pope John Paul II.

A friend of St. Thomas More’s, St. John Fisher also had a close connection to Henry VIII, having once been his tutor, and was a friend of the royal family. As the Bishop of Rochester, he was known as a man of great leaning and deep and unshakable faith. He was supported by the King and appointed to the lifetime position of Chancellor of the University of Cambridge.

However, he too fell into disfavor with Henry when he also opposed the King’s unlawful divorce of Queen Catherine of Aragon. Bishop Fisher courageously warned Parliament of Henry’s encroaching powers over the Church in England in direct disregard of the Papal audit, and publicly preached against the divorce from the pulpit at the same time as Sir Thomas More was resigning his high office. By thus calling down the King’s fury on himself, the holy Bishop of Rochester suffered multiple imprisonments in the Tower, during which time he was made a Cardinal by the authority of Pope Paul III – and appointment which Henry rejected.

Fisher was condemned to be hung, drawn and quartered; and, although originally sentenced to be killed on June 24, the feast of St. John the Baptist, the King had a superstitious fear of executing him on that feast because of the strong resemblance of the deaths of these two saints, and instead had him beheaded – ironically just like John the Baptist after all – two days earlier, on June 22, 1535.

Thomas More and John Fisher were beatified together by Pope Leo XIII in 1886, and canonized together by Pius XI in 1935. One a layman and statesman, the other a priest and bishop – they stand together as models and heroes of religious freedom against encroaching government powers.