WE WILL REMEMBER THEM

I thought you would appreciate me sharing this with you.   I am now halfway through my tenure as the National Vice Chairman of The Royal British Legion. Remembrance Day will be different, here in UK, and elsewhere in the Commonwealth, to any other we have experienced in our lifetime.

On November 7th, 1920, in strictest secrecy, four unidentified British bodies were exhumed from

temporary battlefield cemeteries at Ypres, Arras, the Asine and the Somme.

None of the soldiers who did the digging were told why.

The bodies were taken by field ambulance to GHQ at St-Pol-Sur-Ter Noise. Once there, the bodies were draped with the Union flag and sentries were posted.  Brigadier-General Wyatt and a Colonel Gell selected one body at random. The other three were reburied.

A French Honour Guard was selected and stood by the coffin overnight of the chosen soldier;

can you possibly imagine the privilege, the proximity to the loss, the raw emotion of standing guard to a man who gave his all, and that of his family.

On the morning of the 8th November, a specially designed coffin made of oak from the grounds of Hampton Court arrived and the Unknown Warrior was placed inside.    On top was placed a crusaders sword and a shield on which was inscribed:

On the 9th of November, the Unknown Warrior was taken by horse-drawn carriage through

Guards of Honour and the sound of tolling bells and bugle calls to the quayside.

There, he was saluted by Marechal Foch and loaded onto HMS Verdun bound for Dover.

The coffin stood on the deck covered in wreaths, surrounded by the French Honour Guard.

Upon arrival at Dover, the Unknown Warrior was met with a nineteen-gun salute - something that

was normally only reserved for Field Marshals.

A special train had been arranged and he was then conveyed to Victoria Station, London.

He remained there overnight.  On the morning of the 11th of November, the coffin was placed, by the bearer party from the 3rd Battalion Coldstream Guards, on a gun carriage drawn by six black horses of the Royal Horse Artillery, and finally taken to Westminster Abbey.  There he was met by a very special group of women as guests of honour.  The guests of honour were a group of about one hundred women, chosen because they had each lost their husband and all their sons in the war.  "Every woman so bereft who applied for a place got it".

The idea of the unknown warrior was thought of by a Padre called David Railton who had served on the front line during the Great War. The Union Flag he had used as an altar cloth whilst at the front, was the one that had been draped over the coffin.  In 1920 he wrote to the Dean of Westminster – Herbert Edward Ryle proposing that an unidentified British soldier from the battlefields in France be buried with due ceremony in Westminster Abbey "amongst the kings" to represent the many hundreds of thousands of Empire dead. The idea was strongly supported by the Dean and the Prime Minister, David Lloyd George.

It was his intention that all of the relatives of the 517,773 combatants whose bodies had not been

identified could believe that the Unknown Warrior could very well be their lost husband, father, brother or son.

The coffin was interred in the far western end of the Nave, only a few feet from the entrance,

in soil brought from each of the main battlefields and covered with a silk pall. Servicemen from the armed forces, including one hundred who were awarded the Victoria Cross for bravery in the Great War, stood guard as tens of thousands of mourners filed silently past. The ceremony appears to have served as a form of catharsis for collective mourning on a scale not previously known.

The grave was then capped with a black Belgian marble stone (the only tombstone in the Abbey on which it is forbidden to walk) featuring this inscription, composed by Herbert Edward Ryle, engraved with brass from melted down wartime ammunition. 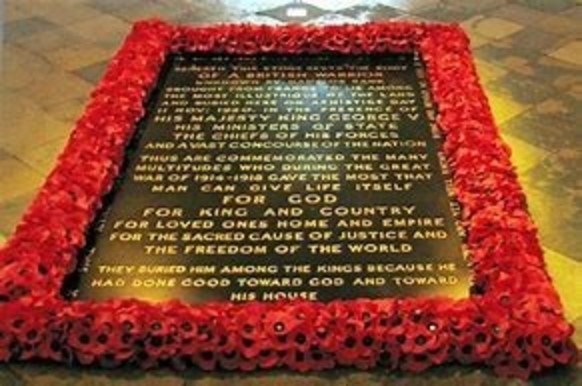 BENEATH THIS STONE RESTS THE BODY

OF A BRITISH WARRIOR

UNKNOWN BY RANK OR NAME

BROUGHT FROM FRANCE TO LIE AMONG

THE MOST ILLUSTRIOUS OF THE LAND

AND BURIED HERE ON ARMISTICE DAY

HIS MINISTERS OF STATE

THE CHIEFS OF HIS FORCES

AND A VAST CONCOURSE OF THE NATION

THUS ARE COMMEMORATED THE MANY

MULTITUDES WHO DURING THE GREAT

MAN CAN GIVE LIFE ITSELF

FOR KING AND COUNTRY

FOR LOVED ONES HOME AND EMPIRE

FOR THE SACRED CAUSE OF JUSTICE AND

THE FREEDOM OF THE WORLD

THEY BURIED HIM AMONG THE KINGS BECAUSE HE

HAD DONE GOOD TOWARD GOD AND TOWARD

Around the main inscription are four quotations from the New Testament:

The Lord knoweth them that are his (top;)

Unknown and yet well known, dying and behold we live (side;)

Greater love hath no man than this (side;)

In Christ shall all be made alive (base;)

This is the reason we wear poppies.

Remembrance: simple remembrance. Not to glorify war, but to remember its human cost. The cost of suffering and sacrifice.

We remember - with humility - the great and the ultimate sacrifices that were made, not just in this war, but in every war and conflict where service personnel have fought - to ensure the liberty and freedoms that we now enjoy (and is perhaps taken for granted by some).

Every year, on the 11th of November, we remember the Unknown Warrior.

At the going down of the sun, and in the morning, we will remember them.

To see the full story we have the video below.:

Bishop Paul Mason, Catholic Bishop of the Forces, gives us a thought-provoking reflection on remembrance, war memorials, prayer and what we learn from the 'growing pains' of our shared history. Recorded for Remembrance Sunday 2020.

With proud thanksgiving, a mother for her children,

England mourns for her dead across the sea.

Flesh of her flesh they were, spirit of her spirit,

Fallen in the cause of the free.

Sings sorrow up into immortal spheres,

There is music in the midst of desolation

And a glory that shines upon our tears.

They went with songs to the battle, they were young,

Straight of limb, true of eye, steady and aglow.

They were staunch to the end against odds uncounted;

They fell with their faces to the foe.

They shall grow not old, as we that are left grow old:

Age shall not weary them, nor the years condemn.

At the going down of the sun and in the morning

We will remember them.

They mingle not with their laughing comrades again;

They sit no more at familiar tables of home;

They have no lot in our labour of the day-time;

They sleep beyond England's foam.

But where our desires are and our hopes profound,

Felt as a well-spring that is hidden from sight,

To the innermost heart of their own land they are known

As the stars are known to the Night;

As the stars that shall be bright when we are dust,

Moving in marches upon the heavenly plain;

As the stars that are starry in the time of our darkness,