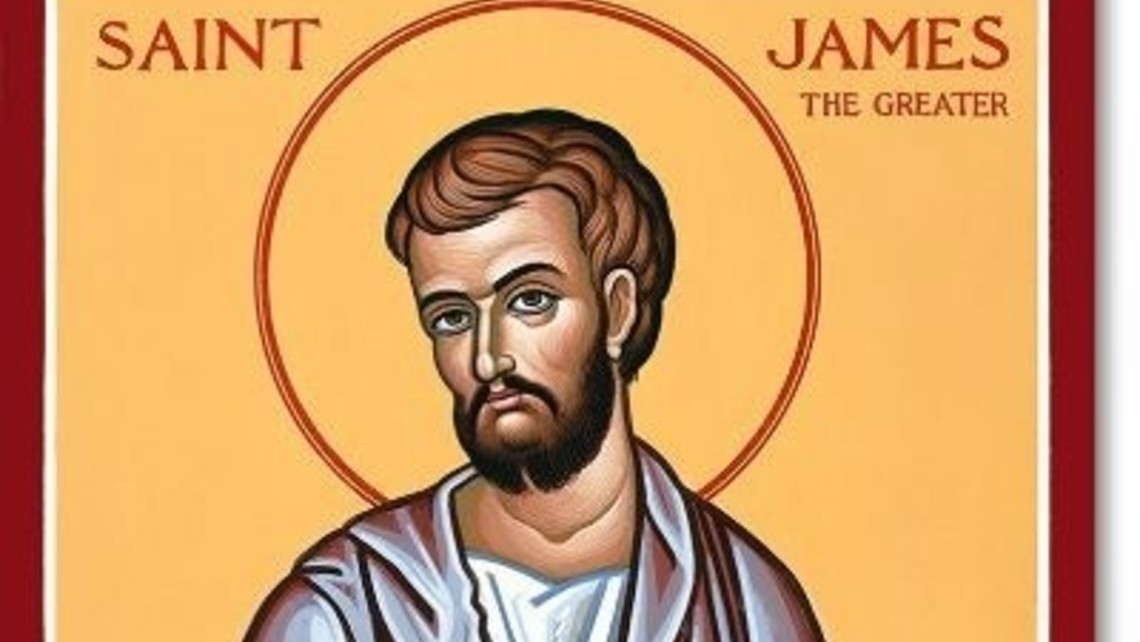 This James is the brother of John the Evangelist. The two were called by Jesus as they worked with their father in a fishing boat on the Sea of Galilee. Jesus had already called another pair of brothers from a similar occupation: Peter and Andrew. “He walked along a little farther and saw James, the son of Zebedee, and his brother John. They too were in a boat mending their nets. Then he called them. So they left their father Zebedee in the boat along with the hired men and followed him” (Mark 1:19-20).

James was one of the favored three who had the privilege of witnessing the Transfiguration, the raising to life of the daughter of Jairus, and the agony in Gethsemani.

Two incidents in the Gospels describe the temperament of this man and his brother. Saint Matthew tells that their mother came—Mark says it was the brothers themselves—to ask that they have the seats of honor in the kingdom. “Jesus said in reply, ‘You do not know what you are asking. Can you drink the cup that I am going to drink?’ They said to him, ‘We can’” (Matthew 20:22). Jesus then told them they would indeed drink the cup and share his baptism of pain and death, but that sitting at his right hand or left was not his to give—it “is for those for whom it has been prepared by my Father” (Matthew 20:23b). It remained to be seen how long it would take to realize the implications of their confident “We can!”

The other disciples became indignant at the ambition of James and John. Then Jesus taught them all the lesson of humble service: The purpose of authority is to serve. They are not to impose their will on others, or lord it over them. This is the position of Jesus himself. He was the servant of all; the service imposed on him was the supreme sacrifice of his own life.

On another occasion, James and John gave evidence that the nickname Jesus gave them—“sons of thunder”—was an apt one. The Samaritans would not welcome Jesus because he was on his way to hated Jerusalem. “When the disciples James and John saw this they asked, ‘Lord, do you want us to call down fire from heaven to consume them?’ Jesus turned and rebuked them…” (Luke 9:54-55).

James was apparently the first of the apostles to be martyred. “About that time King Herod laid hands upon some members of the church to harm them. He had James, the brother of John, killed by the sword, and when he saw that this was pleasing to the Jews he proceeded to arrest Peter also” (Acts 12:1-3a).

This James, sometimes called James the Greater, is not to be confused with James the Lesser or with the author of the Letter of James and the leader of the Jerusalem community.

It is unfortunate that no contemporary biography was written of a man who has exercised the greatest influence... END_OF_DOCUMENT_TOKEN_TO_BE_REPLACED

END_OF_DOCUMENT_TOKEN_TO_BE_REPLACED

The UK’s plans to forcibly deport to Rwanda some of those seeking refuge in our country is shamefully illustrative of what Pope Francis has... END_OF_DOCUMENT_TOKEN_TO_BE_REPLACED