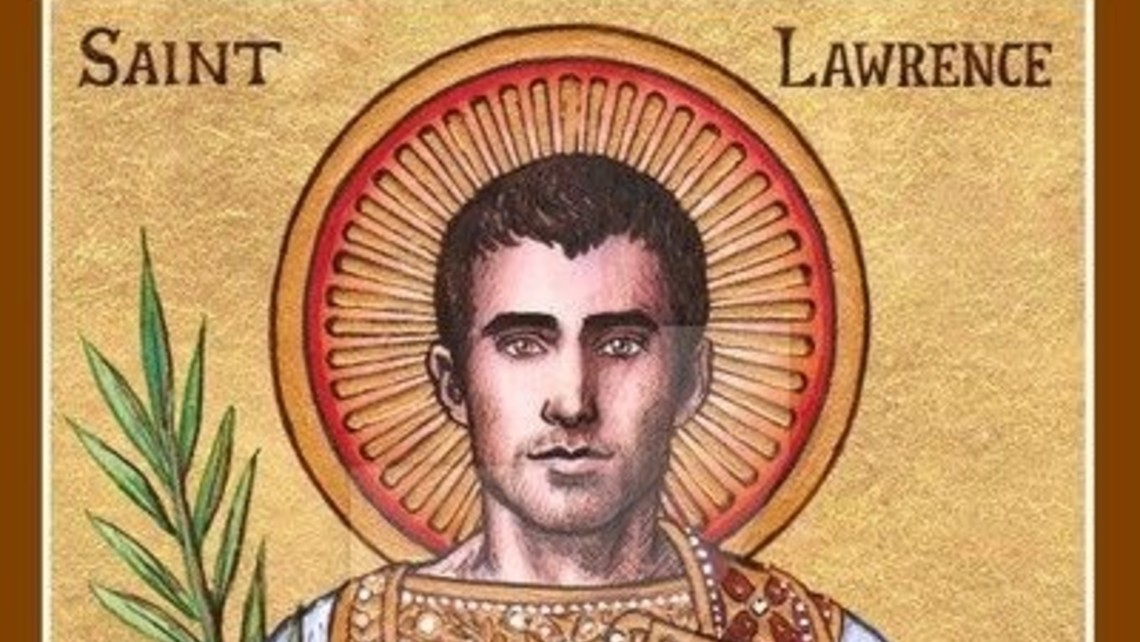 The esteem in which the Church holds Lawrence is seen in the fact that today’s celebration ranks as a feast. We know very little about his life. He is one of those whose martyrdom made a deep and lasting impression on the early Church. Celebration of his feast day spread rapidly.

He was a Roman deacon under Pope Saint Sixtus II. Four days after this pope was put to death, Lawrence and four clerics suffered martyrdom, probably during the persecution of the Emperor Valerian.

Legendary details of Lawrence’s death were known to Damasus, Prudentius, Ambrose, and Augustine. The church built over his tomb became one of the seven principal churches in Rome and a favorite place for Roman pilgrimages.

A well-known legend has persisted from earliest times. As deacon in Rome, Lawrence was charged with the responsibility for the material goods of the Church, and the distribution of alms to the poor. When Lawrence knew he would be arrested like the pope, he sought out the poor, widows, and orphans of Rome and gave them all the money he had on hand, selling even the sacred vessels of the altar to increase the sum. When the prefect of Rome heard of this, he imagined that the Christians must have considerable treasure. He sent for Lawrence and said, “You Christians say we are cruel to you, but that is not what I have in mind. I am told that your priests offer in gold, that the sacred blood is received in silver cups, that you have golden candlesticks at your evening services. Now, your doctrine says you must render to Caesar what is his. Bring these treasures—the emperor needs them to maintain his forces. God does not cause money to be counted: He brought none of it into the world with him—only words. Give me the money, therefore, and be rich in words.”

Lawrence replied that the Church was indeed rich. “I will show you a valuable part. But give me time to set everything in order and make an inventory.” After three days he gathered a great number of blind, lame, maimed, leprous, orphaned, and widowed persons and put them in rows. When the prefect arrived, Lawrence simply said, “These are the treasure of the Church.”

The prefect was so angry he told Lawrence that he would indeed have his wish to die—but it would be by inches. He had a great gridiron prepared with coals beneath it, and had Lawrence’s body placed on it. After the martyr had suffered the pain for a long time, the legend concludes, he made his famous cheerful remark, “It is well done. Turn me over!”

Today the Church celebrates the feast of the Presentation of the Lord which occurs forty days after the birth of Jesus and is also... END_OF_DOCUMENT_TOKEN_TO_BE_REPLACED

On Feb. 6, the Catholic Church honors the 26 Martyrs of Nagasaki, a group of native Japanese Catholics and foreign missionaries who suffered... END_OF_DOCUMENT_TOKEN_TO_BE_REPLACED

is one of the most highly venerated virgin martyrs of... END_OF_DOCUMENT_TOKEN_TO_BE_REPLACED