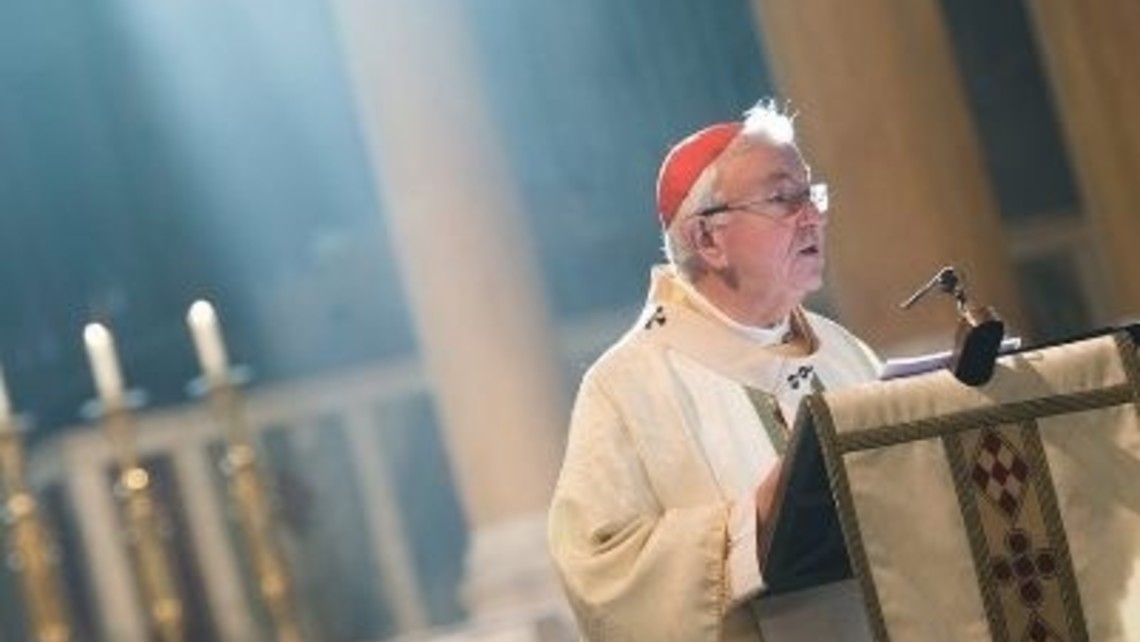 Cardinal: In the face of the wholesale death of war we are either struck dumb or cling to the Christ’s Cross

Cardinal Vincent Nichols preached this homily at a special Thanksgiving Mass to mark the 75th Anniversary of Victory in Europe Day (VE Day) and the end of World War Two in Europe.

I am not old enough to remember VE Day! Many of you are! I just about remember that exciting feeling when rationing of sweets ended and there was a steady supply of butter. But the excitement of 8 May 1945 was too early for me.

Today gives us all an opportunity to recall afresh the excitement of victory in the enormous effort of that terrible war. Images of that excitement abound today, and this Memorial Day will be rounded off by Her Majesty the Queen herself.

On Sunday 13 May 1945, a Mass of Thanksgiving was celebrated here in this Cathedral by Cardinal Griffin. He spoke of the pride in the armed forces, in the example set by the King and Queen, in the leadership of Winston Churchill. He described the war as a fight to the death against totalitarianism and added, I quote, “an ugly word for an ugly thing which means that the State lays claim to the bodies and souls of its citizens, usurping the place of God”. That ugliness we saw in its fullness particularly in the “ghastly truth of the concentration camps.”

Ronnie Knox, that great preacher, pointed the way in which we were to thank God. I quote:

“Thank God not so much because our enemies have been humiliated as because one more warning has been pasted up on the notice-board of history against the drunkard’s dream of world-conquest.”

It was a time of great rejoicing indeed.

But there was also much sorrow in that rejoicing: so many not coming home; so many lost lives at home; so much destruction. Sense had to be made of all the death and suffering: lives taken and many lives given.

In the prayers of those days, as in these days too, the reality and cost of self-sacrifice is central. Indeed, the ultimate prayer we have been given, the prayer of the Mass, has at this heart the act of self-sacrifice: the mystery of the Word of God in our flesh, offering himself in sacrifice for our freedom.

In the face of the ugly and wholesale death of war we are either struck dumb or we cling to the Cross of Christ. He alone gives death and suffering a new and redemptive dimension. He gave of himself that we might live. So too did so many.

In his Godhead Jesus has victory over death; in his humanity he gives us a share in that victory, such that we, can our turn, can make an offering of our suffering and even of life itself. No wonder the words of the hymn Abide with me strike such a deep chord in our land. “Hold thou thy Cross before my closing eyes… in life, in death, O Lord, abide with me”. This, too, we remember today with profound thankfulness.

There was another sense in the hearts of many on that day in May seventy-five years ago. They knew that huge challenges lay ahead. A social order and a society had to be rebuilt, not just here but in so many other countries, too. New dangers stalked the world: poverty, long-term unemployment, rancour and discord which had to be overcome if a true peace, always more than the absence of war, was to be constructed.

History tells us that in the post-war years some great achievements emerged from dialogue and mutual effort. A need was recognised for more than a renewed economy. A renewal of spirit, a renewal of identity, a renewal of values and personal moral vision was needed to replace the deconstruction of so much in the brutality of warfare. The vision of faith, the Christian faith, played a crucial part in that effort, notably in the construction of a renewed system of education. Similarly, the NHS emerged, and social renewal in housing and welfare. It was a time of building, houses and souls. That too must be part of our reflection today, and part of our thanksgiving.

Now we are living through our own crisis. Today we work hard for victory over this devastating virus. Today we see the patterns of self-sacrifice emerge again from the depths of the human soul. Today we begin to glimpse the immensity of the task that lies ahead, with poverty, unemployment, vast movements of vulnerable people just some of the challenges we face. We too need all our resources to meet these challenges and refashion a society that is intent on ignoring no-one, no matter how weak.

In these weeks we are working together to ensure that no-one, no matter how weak, is left without the medical care they need in this pandemic. That pattern and intent can truly be a model, a pointer, for the society we want to fashion anew in our day. Through our politics, through our business and enterprise, through our education, through our families, through our faith we can fashion a society focussed on and dedicated to the common good, a good from which no one, absolutely no one, is excluded.

Victory in Europe, 8 May 1945, was a marvellous moment. The war continued in the Far East until September. But it was a moment of such invigorating joy that we do well to remember and celebrate it in thanksgiving and prayer. May God bless all those who won for us that victory. May God bless us all in our present struggle. May God and the light that He alone can give, always be our guide and our strength. Amen.

Archbishop Arthur Roche, Prefect of the Congregation for Divine Worship and the Discipline of the Sacraments, will be elevated to the rank of Cardinal... END_OF_DOCUMENT_TOKEN_TO_BE_REPLACED

END_OF_DOCUMENT_TOKEN_TO_BE_REPLACED

Pope Francis, in connection with international shrines worldwide, will lead a Rosary for peace from the Basilica of St. Mary Major on 31... END_OF_DOCUMENT_TOKEN_TO_BE_REPLACED