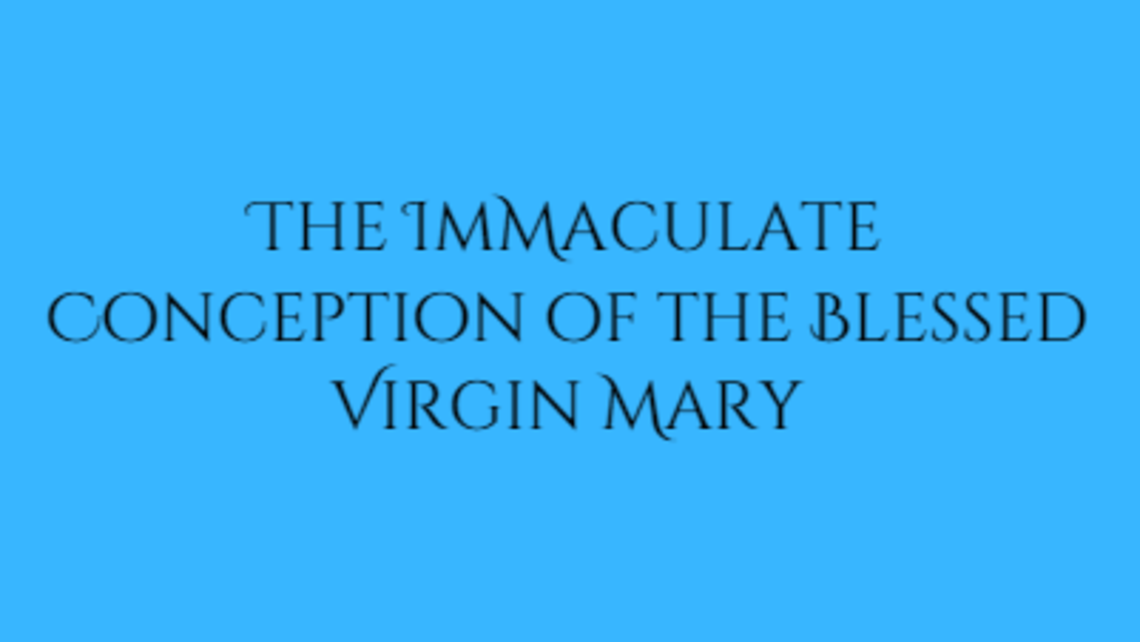 The Catholic Church teaches that the Blessed Virgin Mary was immaculately conceived, that is, from the time of her conception in her mother’s womb, she was free from the stain of the original sin of our first parents, Adam and Eve. This is a singular privilege of Mary Most Holy, applicable to no other human being.

By disobeying God’s command to refrain from eating of the tree of knowledge, Adam and Eve forfeited their original holiness, their innocence and integrity (Genesis 2-3).

They lost sanctifying grace, and human nature became “wounded”. Whereas before original sin our nature’s lower powers, passions and instincts were easily ruled by reason and the spirit, after original sin these same powers, passions and instincts became weakened and rebellious (CCC 396-309). Because Adam and Eve were the “seed” of the great human tree, every human being’s nature is tainted in that seed, although without personal guilt.

But it was only right that one human creature, the one chosen to be the New Ark of the Covenant, the tabernacle of the living God, should be sinless from the start.

Two passages in Scriptures support this claim:
Genesis 3:15 and Luke 1:28.

Genesis 3:15 mentions that “enmity” would be placed between the serpent and “the Woman”. Sin of any kind is subjection to Satan, and if “the Woman”, interpreted by the Church as Mary, was to have nothing in common with him, she had to be sinless.

In Luke 1:28, the angel calls Mary “full of Grace” pointing to the fact that she had never lacked grace.

Throughout the centuries, several were the antagonists and protagonists of this doctrine. There were saints and sages on both sides of the debate. In the thirteenth century, Venerable Duns Scotus was one of the most brilliant advocates of the doctrine of the Immaculate Conception. His is the beautiful argument that if Our Lord Jesus, as God, was capable of exempting his Mother from the original stain, He would certainly, as a loving Son, have done it.

In 1598 Pope St. Pius V included the feast of the Immaculate Conception in the Roman breviary.

But it was only in 1854 that Blessed Pope Pius IX solemnly proclaimed, as Church Dogma, the doctrine that Mary was, indeed, exempt from original sin and immaculately conceived.

In 1858 in Lourdes, in the final apparition to young Bernadette Soubirous, Our Lady electrified the world when she said, “I am the Immaculate Conception”, thus echoing Blessed Pius IX’s infallible declaration.

At the Council of Jerusalem Although not mentioned by name in the Acts of the Apostles, Titus was recruited by... END_OF_DOCUMENT_TOKEN_TO_BE_REPLACED

In the late 16th and early 17th century, St. Frances de Sales conducted spiritual direction both in person and in written correspondence. This... END_OF_DOCUMENT_TOKEN_TO_BE_REPLACED

By universal consent, Thomas Aquinas is the preeminent spokesman of the Catholic tradition of reason and of divine revelation. He is one of the... END_OF_DOCUMENT_TOKEN_TO_BE_REPLACED