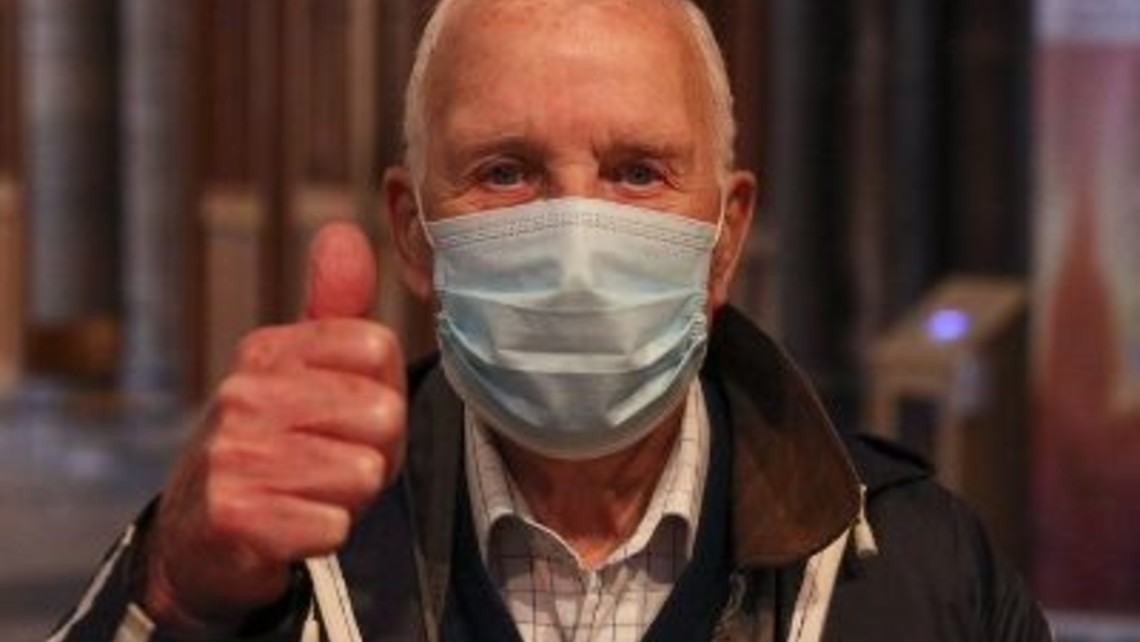 Salisbury Cathedral has been transformed into a vaccination centre with an RAF veteran being one of the first to receive the Covid-19 jab.

Former Flight Sergeant Lou, 95, gave a thumbs-up after being vaccinated in the cathedral, which dates back more than 800 years.

"I was so pleased to get it, especially in a setting like this," he said.

Organisers were aiming to vaccinate 1,000 people aged over 80 with the Pfizer/BioNTech jab on Saturday.

Lou, a great-grandfather of 12, joined the RAF aged 18 in 1943 and served as an air gunner during World War Two.

"I've had many jabs in my time, especially in the RAF. After the war, I was sent to Egypt and I had a couple of jabs which knocked me over for a week," he said.

"This one, the doctor said to me 'well that's done' and I thought he hadn't started. So it's no trouble at all and no pain."

The Very Rev Nicholas Papadopulos, Dean of Salisbury described the vaccines as "a real sign of hope for us at the end of this very, very difficult year".

"I doubt that anyone is having a jab in surroundings that are more beautiful than this so I hope it will ease people as they come into the building," he said.

David is the patron saint of Wales and perhaps the most famous of British saints. Ironically, we have... END_OF_DOCUMENT_TOKEN_TO_BE_REPLACED

The Feast of the Chair of St. Peter commemorates Christ’s choosing Peter to sit in his place as the servant-authority of the whole Church.... END_OF_DOCUMENT_TOKEN_TO_BE_REPLACED

This year’s World Day of Prayer Service is to be held online! The... END_OF_DOCUMENT_TOKEN_TO_BE_REPLACED