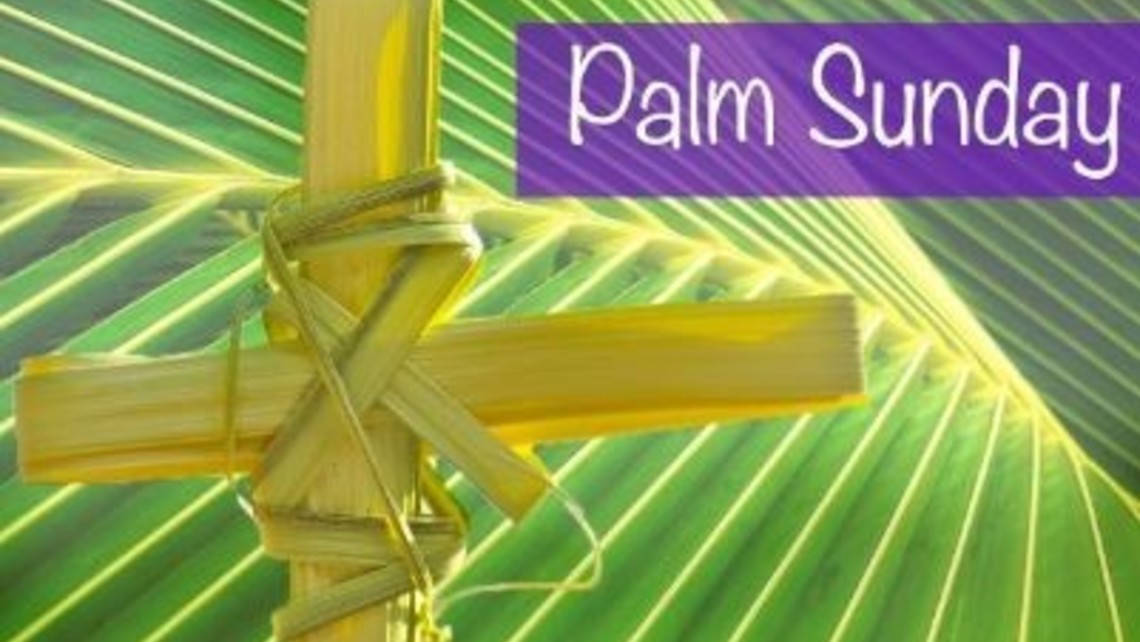 It is a time of despair, perplexity and contradiction. The very people who applaud Christ’s entrance into Jerusalem that morning, shouting out “Hosanna” and words of adoration will, within a week, be crying, “Crucify Him.” They will go from acclaiming Him as the new King of Israel to urging His life be traded in favor of a convicted criminal; they will first praise Him and then mock Him. Even friends entering Jerusalem at His side will desert Jesus. All this discord will take place during one week beginning on what we call Palm Sunday.

As we read in the Gospels, Jesus went to Jerusalem to join with throngs of other Jews to celebrate the Passover feast as had been prescribed in the Old Testament books of Exodus and Deuteronomy. According to the Gospel of St. John, Jesus and many of his followers journeyed the less than two miles from Bethany on that Sunday, arriving outside Jerusalem. As was the custom, pilgrims that had already arrived in the city went out to greet newly arriving groups; some had never seen Jesus but had heard about the miracles attributed to Him and were caught up in the excitement.

Those arriving with and greeting Jesus were large in number as explained by John’s Gospel: “When the great crowd … heard that Jesus was coming to Jerusalem, they took palm branches and went out to meet him, and cried out: ‘Hosanna! / Blessed is he who comes in the name of the Lord, [even] the king of Israel’” (12:12-13).

This adulation was not lost on the Pharisees who were present. They said to Jesus, “Teacher, rebuke your disciples.” He said in reply, “I tell you, if they keep silent, the stones will cry out” (see Lk 19:39-40). The Pharisees reported the events back to the Jewish high council, the Sanhedrin, which regarded Jesus’ ever growing popularity as a threat to their cozy relationship with the Romans. They were, in fact, planning to murder Him.

Previously, Our Lord had deliberately avoided popular acclaim, even fled, but this, upon entering Jerusalem, He accepts. Yet His actions are different than the people expected. He doesn’t present himself as a rival to Caesar; He is not the political messiah or the warrior king the multitude had clamored for. Instead of entering Jerusalem on a war horse or chariot, he enters on a donkey, a sign of peace; and not just any donkey, but one on which no one had ever sat, the prerogative of a king. Seeing Him on the donkey, the Jews surging around Him recalled the words of the Prophet Zechariah 500 years earlier:

“Exult greatly, O daughter Zion! / Shout for joy, O daughter Jerusalem! / Behold: your king is coming to you; /a just savior is he, / Humble, and riding on a donkey, / on a colt, the foal of a donkey. / He shall banish the chariot from Ephraim / and the horse from Jerusalem” (Zec 9:9-10).

Pope Benedict XVI explained these Old Testament words as they related to Jesus: “He is a king who destroys the weapons of war, a king of peace and a king of simplicity, a king of the poor.… Jesus is not building on violence; he is not instigating a military revolt against Rome” (“Jesus of Nazareth: Holy Week,” Ignatius Press, 2011, pp. 81-82).

Riding on the borrowed donkey, Jesus made His humble entrance into the city while the crowds were scattering their garments before Him and waving their palm branches. This joyful scene belies the traitorous acts, sorrow and agony that will soon follow, belies that this triumphant hero will be crucified like a criminal.

St. Bernard of Clairvaux (1090-1153) offered a homily about Christ’s entry into Jerusalem: “How different the cries, ‘Away with him, away with him, crucify him,’ and then, ‘Blessed is he who comes in the name of the Lord, hosanna, in the highest!’ How different the cries are that now are calling him ‘King of Israel’ and then in a few days’ time will be saying, ‘We have no king but Caesar!’ What a contrast between the green branches and the cross, between the flowers and the thorns! Before they were offering their own clothes for him to walk upon, and so soon afterwards they are stripping him of his, and casting lots upon them.”

Implication of the Palms

Palms were symbols of life among the nomadic tribes, who, when crossing the desert, rejoiced at seeing the palm tree as it indicated an oasis with life-giving water was near. Palms have long been a sign of victory, success and glory. Victorious armies or leaders returning from the battlefield or a long military campaign were welcomed by the populace jubilantly waving palm branches. Despite Jesus’ peaceful manner, when the Jews waved the palms at Him and spread their clothing over which He rode, they were affording Him the honors of a conquering hero and simultaneously defying the Roman occupiers.

On Palm Sunday, we still go out to meet Him, carry the blessed palms, joyfully sing out our hosanna and join in His triumphant entrance into Jerusalem. But soon our joy turns to somberness as, clutching our palm, we hear the narrative of Christ’s passion. We realize, once again, that His triumph, His true victory, will come through the cross. We know, as Jesus did, how Holy Week will end. We know that joy will turn to sorrow and back to joy. We know that through the horror of His suffering, followed by the glory of His resurrection, good will trump evil and life will trump death.

The palms we take home and put in a special place serve to remind us that Palm Sunday is not lost to the ages but that by Christ’s victory we, too, can achieve everlasting life. “For us too, they [palms] must be symbols of triumph, indicative of the victory to be won in our battle against the evil in ourselves and against the evil which roams about us. As we receive the blessed palm, let us renew our pledge to conquer with Jesus, but let us not forget that it was on the cross that He conquered” (“Divine Intimacy,” Father Gabriel of St. Mary Magdalen, O.C.D., Tan Books, 1997, pp. 392-393).

In the Jubilee Year 2000, Pope John Paul II proclaimed that from that year... END_OF_DOCUMENT_TOKEN_TO_BE_REPLACED

The Cardinal Archbishop of Westminster and the Archbishop of Canterbury have joined forces to condemn cuts to the UK’s Aid budget that will do... END_OF_DOCUMENT_TOKEN_TO_BE_REPLACED

Following the very successful Pilgrims on the Way programme the Alabaré Community are launching another series of five meetings called “Catch” to run on... END_OF_DOCUMENT_TOKEN_TO_BE_REPLACED