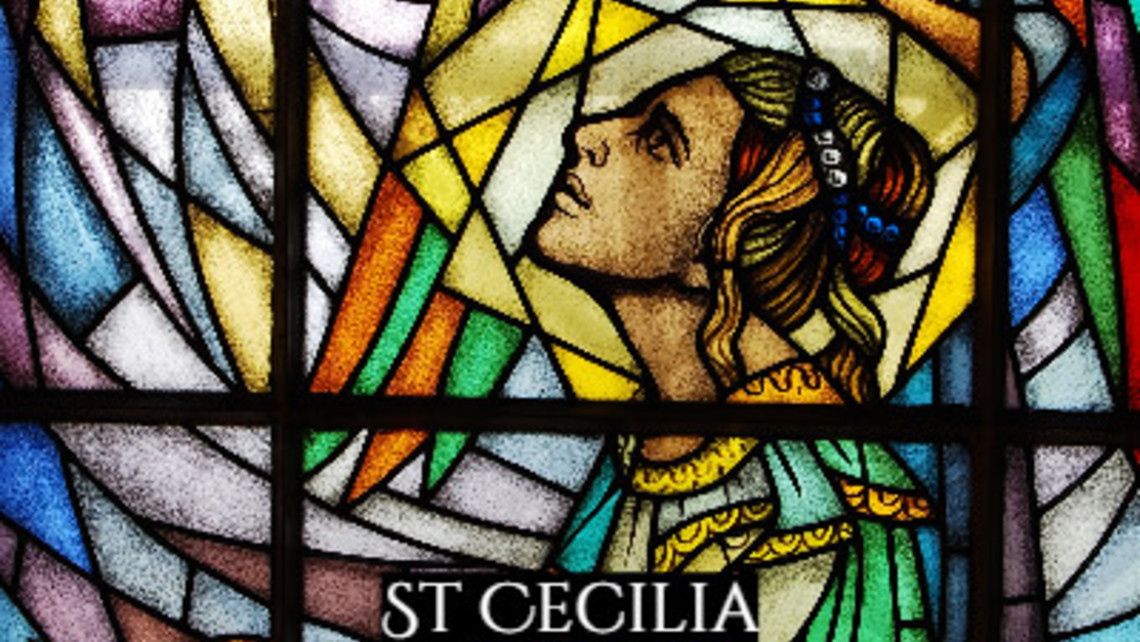 St. Cecilia's family was one of the principle families of Rome. According to the cultural custom of the time, Cecilia's family betrothed her to a pagan nobleman named Valerian despite St. Cecelia's consecration to God. On their wedding night, Cecilia told Valerian that she had sworn to remain a virgin before God and that an angel guarded her body, protecting her virginity from violation. She told Valerian that he would be able to see this angel if he went to the third milestone along the Via Appia and was baptised by Pope Urban I. Valerian went to the milestone as Cecilia had instructed, and there was baptised. She later converted his brother as well.

During that era, it was forbidden for anyone to bury the bodies of Christians, so newly-baptised Valerian and his brother dedicated themselves to burying the bodies of all the Christians they found. For this, they were arrested and brought before a judge who ordered them to worship the Roman god Jupiter, and were martyred when they refused to deny their Christian faith. The police then came for Cecilia and strongly advised her to renounce her faith. In reply, she told them that she would prefer to die than to denounce the true faith. According to legend, upon hearing her response, they brought her to a large oven with the intention of suffocating her with the hot and toxic gasses it emitted. However, instead of choking, Cecilia began to sing. Infuriated, her persecutors attempted to behead her, but after three strokes of the sword, Cecilia was still alive and her head was not severed. The soldiers then left her covered in blood in her own home, where she remained for three days before she died.

The church Santa Cecilia in Trastevere was built on the site of the house where she lived. St. Cecelia is known for "singing in her heart to the Lord" upon her wedding day, despite her consecration to God. She is the patron Saint of musicians and poets because of this sentiment and her alleged singing within the oven during her martyrdom. Her fortitude may inspire the modern Catholic in the trials of life and inspire one to find God within music.

It is after Christianity took root at Antioch, which was home to non-Jews, that the church at Jerusalem sent Barnabas there to take charge... END_OF_DOCUMENT_TOKEN_TO_BE_REPLACED

St. Charles and many other martyrs for the faith died between November 15, 1885 – January 27, 1887 in Namugongo, Uganda. St. Charles and... END_OF_DOCUMENT_TOKEN_TO_BE_REPLACED

V. O Lord, save Elizabeth, our Queen. R. And hear us on the day we call upon... END_OF_DOCUMENT_TOKEN_TO_BE_REPLACED