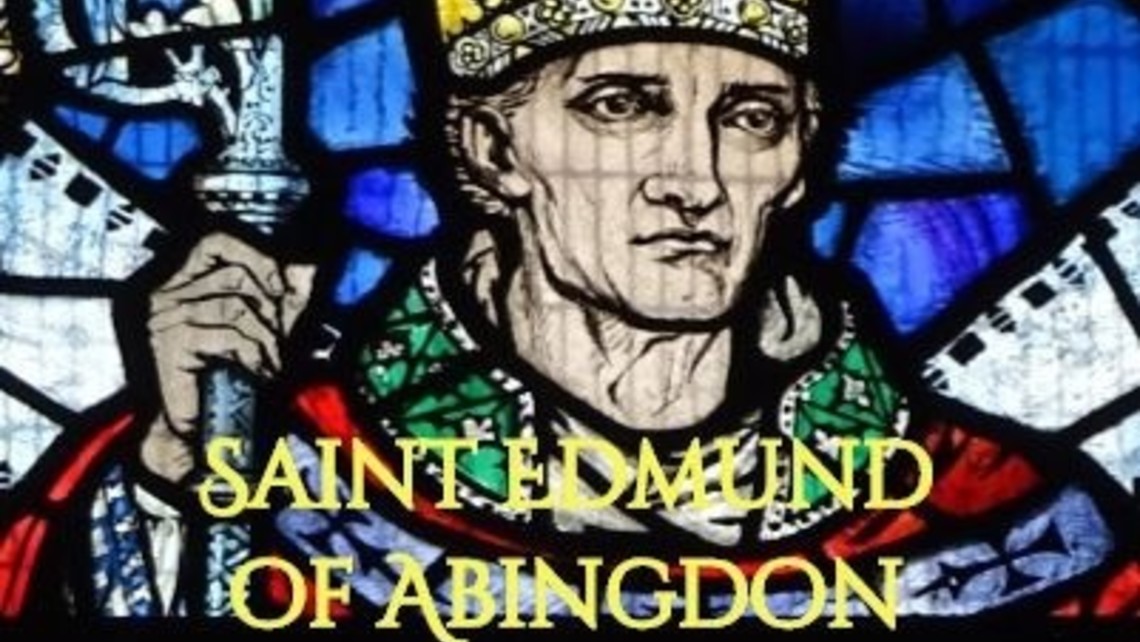 Saint Edmund was born in November 1175 in Abingdon in Oxfordshire. He was the oldest of four children.

‘Rich’ was an epithet sometimes given to his wealthy merchant father, Reginald, but was never applied to Edmund in his lifetime. Edmund’s early studies were in England, but he completed his higher learning at the University of Paris. He studied at the universities of Oxford and Paris and became a teacher about 1200. For six years he lectured on mathematics and dialectics, apparently dividing his time between Oxford and Paris, and helped introduce the study of Aristotle.

He became one of Oxford’s first lecturers with a Master of Arts. There is a long-established tradition that he utilised his lecture-fees to build the Lady Chapel of St Peter’s in the East at Oxford. The site where he lived and taught was formed into a mediaeval academic hall in his name and eventually incorporated as the current college Saint Edmund Hall in Oxford. His mother Mabel influenced him towards self-denial and austerity and this led to his taking up the study of theology.

Sometime between 1205 and 1210 Edmund was ordained, took a doctorate in divinity and became a lecturer on theology at Oxford.

In 1222 he was appointed priest of the parish of Calne in Wiltshire and Treasurer and Canon of Salisbury Cathedral; this was at the time the present catherdral was being built having moved from Old Sarum.  He held this position for eleven years, during which time he also engaged in preaching. In 1227 he preached the Sixth Crusade through a large part of England.

The pope at the time, Gregory IX, had ordered that clergy in England paid tithes to the King Henry III and the tithe for the Treasurer of Salisbury cathedral was high. Matthew Paris, (c. 1200 – 1259), the Benedictine monk and English chronicler, in his contemporary biography of Saint Edmund recalls that Edmund was always in debt, because of these royal tithes and his generosity to the poor.

In his biography of Saint Edmund, C.H. Lawrence writes of Saint Edmund as follows: “Other witnesses who had served in Edmund’s household enlarged on his social virtues, his affability and unfailing courtesy, his generosity to the poor and above all his devotion to the pastoral care of his parishioners and ‘zeal for souls’, As a canon, his parishioners were the peasants living in the parish of Calne, of which he was rector. It was one of his favourite retreats in his Salisbury years. There, when he was not occupied with hearing confessions and sorting out the matrimonial problems of his people, he could make time for long periods of uninterrupted reading.”

In September 1233, at the Calne parish church of Saint Mary the Virgin, came the news from a delegation of Benedictine monks of his appointment, by Pope Gregory IX, as Archbishop of Canterbury. The last archbishop, Richard, had died in 1231 and although the chapter had already made three selections the pope had declined to confirm these. Edmund’s name had been proposed as a compromise by Pope Gregory IX, perhaps on account of Edmund’s work for the crusade. Eventually, much against his will, after three days of being persuaded, Edmund agreed. He was consecrated and ordained as Archbishop in April 1234.

As Archbishop Edmund was valued for his teaching and preaching, his study and his prayer, but his uncompromising stand in favour of good discipline in both civil and Church government, of strict observance in monastic life, and of justice in high quarters brought him into conflict with King Henry III, with several monasteries and with the priests of Canterbury Cathedral. He claimed and exercised metropolitan rights of visitation, this was often challenged and he had to resort to litigation to maintain his authority, not the least with his own monastic chapter at Canterbury.

Edmund firmly defended the rights of Church and State against the exactions Henry III. In December 1237 Edmund set out for Rome to plead his cause in person. From this futile mission he returned to England in August 1238 where his efforts to foster reform were frustrated.

In 1240 Edmund again set out for Rome to attend a Council to be held in 1241 to agree to the removal of the Holy Roman Emperor Fredrick II. At the Cistercian Pontigny Abbey in France he became sick, began travelling back to England, but died only 50 miles further north, on 16 November 1240 at the house of Augustinian Canons at Soisy-Bouy, his body was taken back to Pontigny.

On Nov. 30, Catholics worldwide celebrate the feast of St. Andrew, apostle and martyr. A fisherman from Bethsaida and brother of Simon Peter, St.... END_OF_DOCUMENT_TOKEN_TO_BE_REPLACED

Alexander Briant (1556-1581) was a diocesan priest who entered the Jesuits just before he was executed. He studied at Oxford where one his teachers... END_OF_DOCUMENT_TOKEN_TO_BE_REPLACED

Francisco Xavier is one of the most exciting and adventurous figures of the sixteenth century. He travelled where few westerners had been: to... END_OF_DOCUMENT_TOKEN_TO_BE_REPLACED