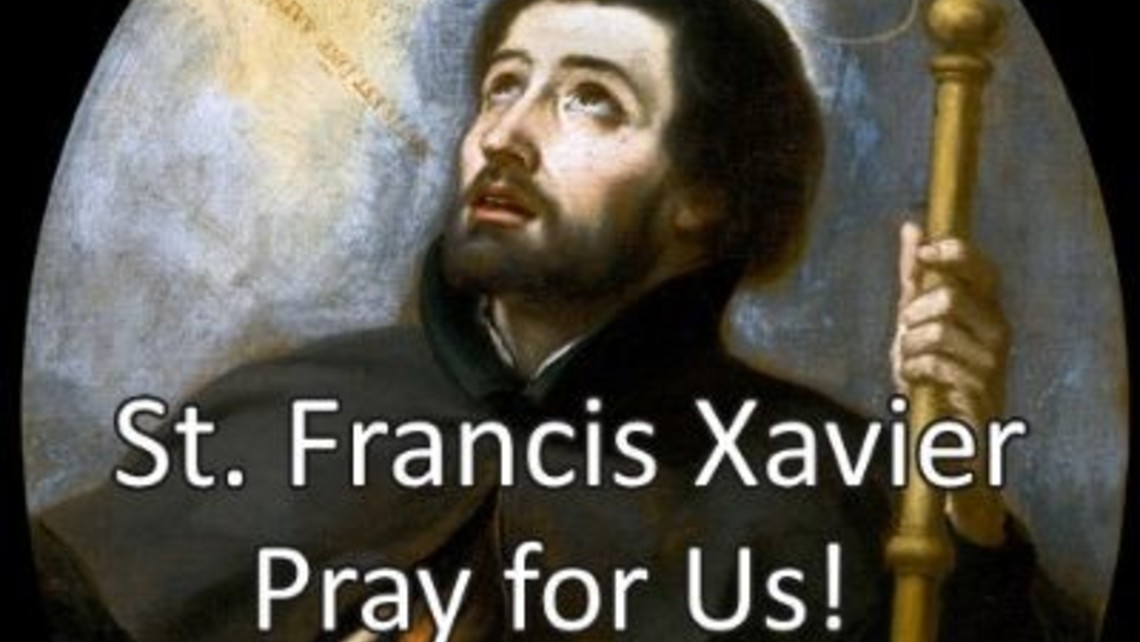 Francisco Xavier is one of the most exciting and adventurous figures of the sixteenth century.  He travelled where few westerners had been: to India, to Malaysia, to Japan, and to China.  He undertook long and arduous voyages, risking everything to bring the gospel of Jesus Christ to farmer and fisherman, king and emperor.

Francisco was born in the castle at Javier, only a few miles from the birthplace of St Ignatius at Loyola.  While students at the University of Paris, they became lifelong friends.  Both were from noble and wealthy families, assured of comfort, success and fame.  But Ignatius was already well on the road to being a pilgrim for God, devoting his life to helping souls.

At first this was not a calling Francisco shared.  But Ignatius’ persistent and gentle taunting, “What will it profit a man to gain the whole world but forfeit his life?” (Mark 8:36) eventually claimed Francisco as his ‘friend in the Lord.’

Joined by others at Paris, these first companions formed what would soon become known as the Company (or Society) of Jesus, bound by vows of poverty, chastity and obedience, ready to go wherever the need was greatest.

Formed by the Spiritual Exercises, Ignatius’ little book of exercises for the spirit, these first Jesuits were on fire with the love of God, a love which showed itself in deeds:  begging alms, teaching catechism, tending to the poor, the sick, and prostitutes and to those rejected by society.

In 1539, King John III of Portugal asked Ignatius for two Jesuits to go to the flourishing Portuguese colony of Goa in India.  Another man dropped out at the last moment and Francisco Xavier seized his opportunity to do greater things for God.

Francisco worked among the Christians of Goa (whose faith, by tradition, was planted by St Thomas the Apostle in the first century) but he was soon attracted to more challenging work among the pearl fishers of Cape Comorin at the very southern tip of India.  Francisco learnt Tamil, the local language, and translated the creed and prayers so that these people could hear Christ in their own tongue.  This adaptation of the faith to the local language and customs was to become a hallmark of Jesuit missions.

Another characteristic Jesuit way of proceeding was to write frequent letters back and forth to each other and especially to Ignatius in Rome.  These letters provide a fascinating insight into lost worlds, hard for us to imagine.  Francisco wrote many such letters.

Francisco spent seven years on the coast of South India, constantly travelling, preaching the gospel, teaching, consoling, comforting, begging alms for the poor, and visiting the sick.  During this time he sailed to Malacca in Malaysia and here met a Japanese man, Anjiro, who inspired him to travel further east to Japan.

Arriving in 1549, the Japanese made a deep impression on Francisco.  In them he found a depth of spiritual awareness which, he believed, made them especially ready to hear the good news of Jesus Christ.  He wrote to the Jesuits he had left behind in India, “May it please God our Lord to grant us a knowledge of the language so that we can speak to them of the things of God, for we shall then, by his grace, favour and assistance, produce much fruit.” (Letter to the Jesuits of Goa in India, 5th November 1549)

But the Japanese refused to believe what Francisco taught them if it was not known in China.  Undaunted, Francisco set out for China, seeking audience at the imperial court.  If converting the Japanese meant first converting the Chinese, this is what he would do.  He landed on Sancian Island in 1552 but there contracted a severe fever from which he died a few weeks later, in sight of mainland China across a narrow stretch of sea.

The life of Anthony will remind many people of Saint Francis of Assisi. At 20, Anthony... END_OF_DOCUMENT_TOKEN_TO_BE_REPLACED

Due to the high Covid-19 rates, the decision has been made to postpone the Parish Get-Together due to take place at St Gregory’s hall... END_OF_DOCUMENT_TOKEN_TO_BE_REPLACED