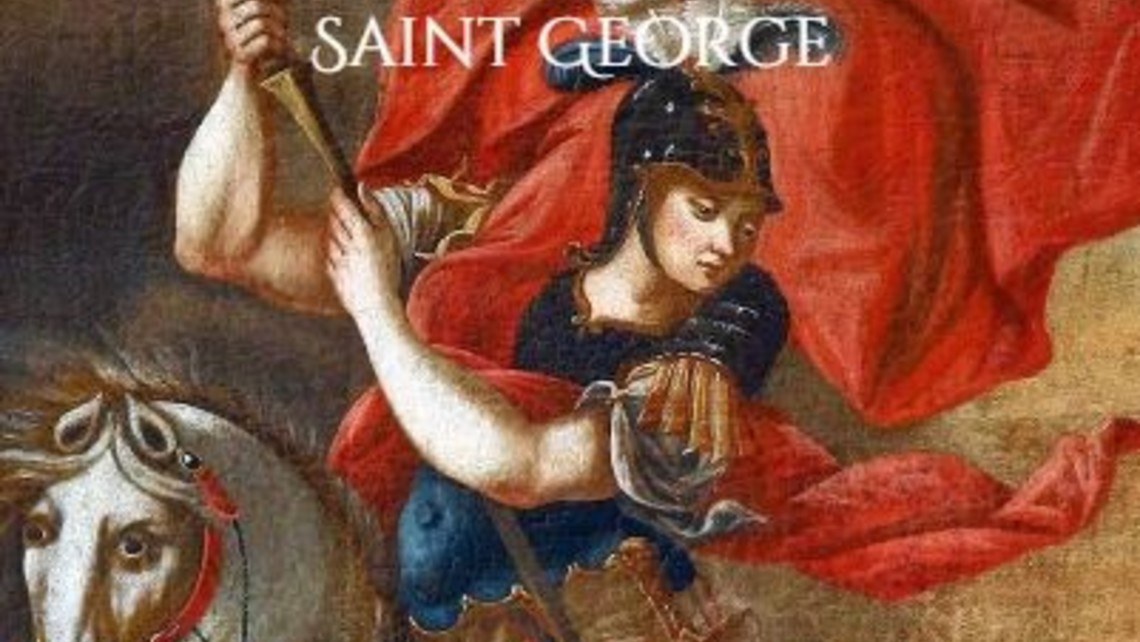 Countless stories are told about St. George, including the famous episode of the dragon and the girl saved by the saint. According to the standard version of the legend, we hear that in the city of Selem in Libya, there was a large pond where a terrible dragon lived. To appease it, the inhabitants offered him two sheep a day and later a sheep and a child drawn by lot. One day the king's daughter was chosen, and while she was heading toward the pond, George passed by and pierced the dragon with his spear; a gesture that became a symbol of faith triumphing over evil.

Who was St. George?

George, whose name in Greek means “farmer,” was born to a Christian family in Cappadocia around the year 280. After moving to Palestine, he joined the army of Diocletian. When the emperor issued the edict of persecution against Christians in 303, George gave all his belongings to the poor and, in front of Diocletian himself, tore the document apart and professed his faith in Christ. For this he suffered terrible torture and was eventually beheaded.

Shortly after his death, a basilica was erected over the place of his burial in Lydda (modern-day Lod, in Israel). His relics are still visible today.

Among the most ancient documents attesting to the existence of St. George, a Greek epigraph from 368 found in Heraclea of Bethany speaks of the "house or church of the saints and triumphant martyrs George and companions". A Passio Georgii was classified among the hagiographic works by the Gelasianum Decree of 496 and deemed apocryphal. There were many later redactions of the Passio, which informed subsequent legends.

From martyr to holy warrior

The crusaders contributed a great deal to transforming the figure of St. George the martyr into a holy warrior, seeing in the killing of the dragon a symbol for the defeat of Islam; Richard I of England (“the Lionheart”) invoked him as the protector of all soldiers. With the Normans the cult of St. George became firmly rooted in England where, in 1348, King Edward III established the Order of the Knights of St. George. Throughout the Middle Ages his figure inspired a great deal of epic literature.

St George is considered the patron of knights, soldiers, scouts, fencers and archers, among others; he is also invoked against the plague and leprosy, and against venomous snakes. In the absence of certain information about his life, in 1969 the Church changed the liturgical feast of St George to an optional memorial on the universal calendar. However, this change did not affect devotion to the saint. The relics of the saint are found in different places of the world; in Rome the church of San Giorgio al Velabro has housed his skull from the time of Pope Zachariah.

As in the case of other saints wrapped in legend, the story of St George serves to remind the world of a fundamental idea, that good ultimately triumphs over evil. The fight against evil is a constant in human history. It is a battle cannot we cannot win on our own. Saint George was able to kill the dragon because God was acting in and through him. With Christ, evil will never have the last word.

The Catholic Church teaches that the Blessed Virgin Mary was immaculately conceived, that is, from the time of her conception in her mother’s... END_OF_DOCUMENT_TOKEN_TO_BE_REPLACED

On Nov. 30, Catholics worldwide celebrate the feast of St. Andrew, apostle and martyr. A fisherman from Bethsaida and brother of Simon Peter,... END_OF_DOCUMENT_TOKEN_TO_BE_REPLACED

Alexander Briant (1556-1581) was a diocesan priest who entered the Jesuits just before he was executed. He studied at Oxford where one his... END_OF_DOCUMENT_TOKEN_TO_BE_REPLACED