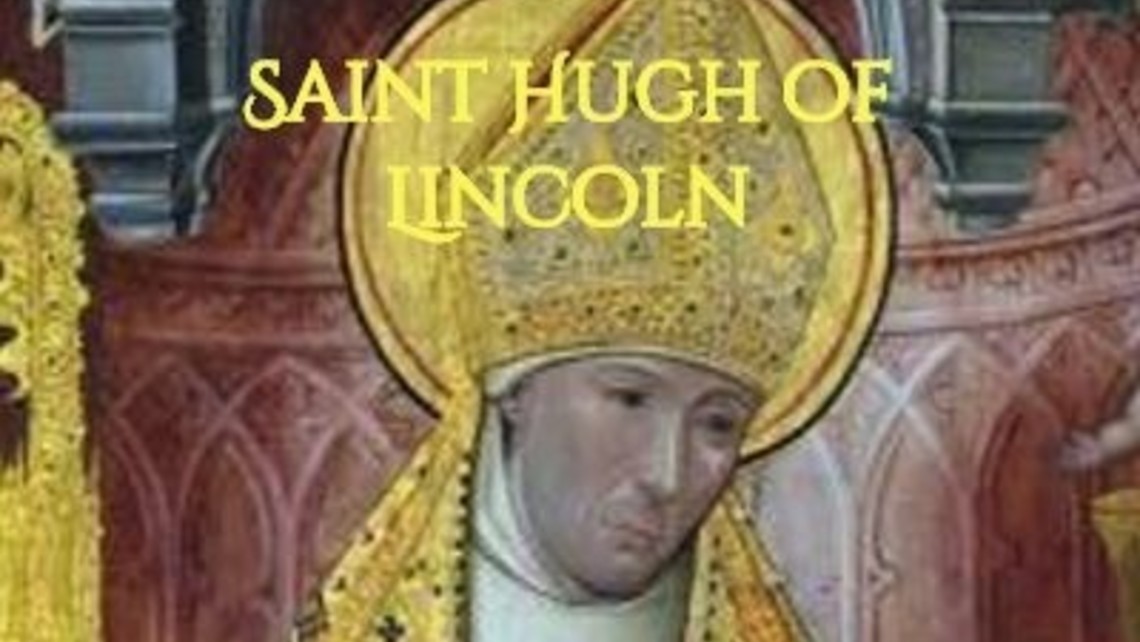 Hugh was born in Avalon, near Grenoble between 1135 – 1140 CE to a French (Burgundian) noble family.  He is also known as Hugh of Avalon.

After his father’s death, he joined the local Carthusian order as a novice and rose to the office of Procurator where his abilities as an administrator were demonstrated.

Although  Hugh was highly principled and outspoken, his conciliatory nature and sense of humour helped him to win over his opponents- in his later life, his leadership as Bishop showed him to be a model cleric.

In one of the many acts of reparation following the death of Thomas Beckett, King Henry II wanted to establish a Carthusian monastery. All attempts to progress the project were frustrated.

The King requested Hugh of Avalon move to England to continue the progress of  establishing of the Carthusian monastery.

Hugh reluctantly moved to Somerset in 1175.  He discovered monks living in temporary huts and no clear building or financial plans to establish a permanent monastery.

Following 7 years of petitions for royal approval, finance and resources  he successfully established the first  English Charterhouse at Witham.

Because of this, he became a favourite of Henry II.  The monastery flourished as did the surrounding villages.

Hugh’s leadership demonstrated his intellectual abilities, his integrity alongside his compassionate and caring nature.

In 1186, Henry II called a meeting with the existing bishops and important clerics to discuss the empty Bishoprics across the land.  As a consequence of his outstanding abilities, Hugh was elected Bishop of Lincoln in May 1186 and despite his reluctance, he was consecrated in September 1186.

He immediately established his independence from Henry II while maintaining good relations with the royal court and nobles.

His time as a priest and later a Bishop took place during a time of well-documented upheaval in England – Henry II, Richard I, and King John, all of whom held him in high regard.  In 1188, he represented Henry II in a diplomatic mission at the French court, during which time Henry II died.  Richard was crowned in September 1189 – and was mainly absent from England for the majority of his reign.  John was crowned in  in 1200 whose reign is well documented in fact and fiction and is known mainly for its mal-administration and the Magna Carta.

As Bishop of Lincoln, one of the first administrative tasks was to rebuild  Lincoln Cathedral which was badly damaged by an earthquake in 1185.

Lincoln Cathedral is considered to be one of the finest examples of a medieval building in England. The timeline of development  is available for to access through the link.

Hugh also orchestrated the rebuilding of St Mary’s Magdalen’s Church, Oxford and the first “Bishop’s Palace” at Buckden – now known as Buckden Towers  – a Christian retreat and conference centre.  A Catholic church, dedicated to St Hugh, is located there.

Like all effective administrators, Hugh surrounded himself with learned and capable men – who assumed the daily tasks of administration and governance of the monastery and later, the diocese.  This meant that he could truly shepherd his flock. As Bishop, Hugh was known for his love of justice and his kindness to the oppressed, children and animals.  Other activities include the following:

risked his own life to prevent the slaying of a group of Jews during a riot in 1190.

His sense of justice was legendary and three popes, as well as the King, made him judge over some of the most important legal cases of the time including upholding the rights of peasants against the King’s harsh and unjust forestry laws.

Bishop Hugh of Lincoln died in London on 16th November 1200.

He was returned to Lincoln Cathedral for interment.  King John of England and King William of Scotland were among two pall bearers carrying his coffin into the Cathedral after a 6 day journey from London.

He was canonised by Pope Honorius III in 1220.

His body was relocated to another (completed) eastern part of the Cathedral later that century to a specially dedicated tomb that can be visited today at Lincoln Cathedral.

St Hugh is usually depicted as a bishop, sometimes as a Carthusian.  In either case he is accompanied by a swan, as it was reported that a fierce swan at his manor at Stow became very tame and attached to him, although it was still aggressive towards everyone else.  In addition to the swan he is usually surrounded by a possé of pigeons!

On Nov. 30, Catholics worldwide celebrate the feast of St. Andrew, apostle and martyr. A fisherman from Bethsaida and brother of Simon Peter, St.... END_OF_DOCUMENT_TOKEN_TO_BE_REPLACED

Alexander Briant (1556-1581) was a diocesan priest who entered the Jesuits just before he was executed. He studied at Oxford where one his teachers... END_OF_DOCUMENT_TOKEN_TO_BE_REPLACED

Francisco Xavier is one of the most exciting and adventurous figures of the sixteenth century. He travelled where few westerners had been: to... END_OF_DOCUMENT_TOKEN_TO_BE_REPLACED