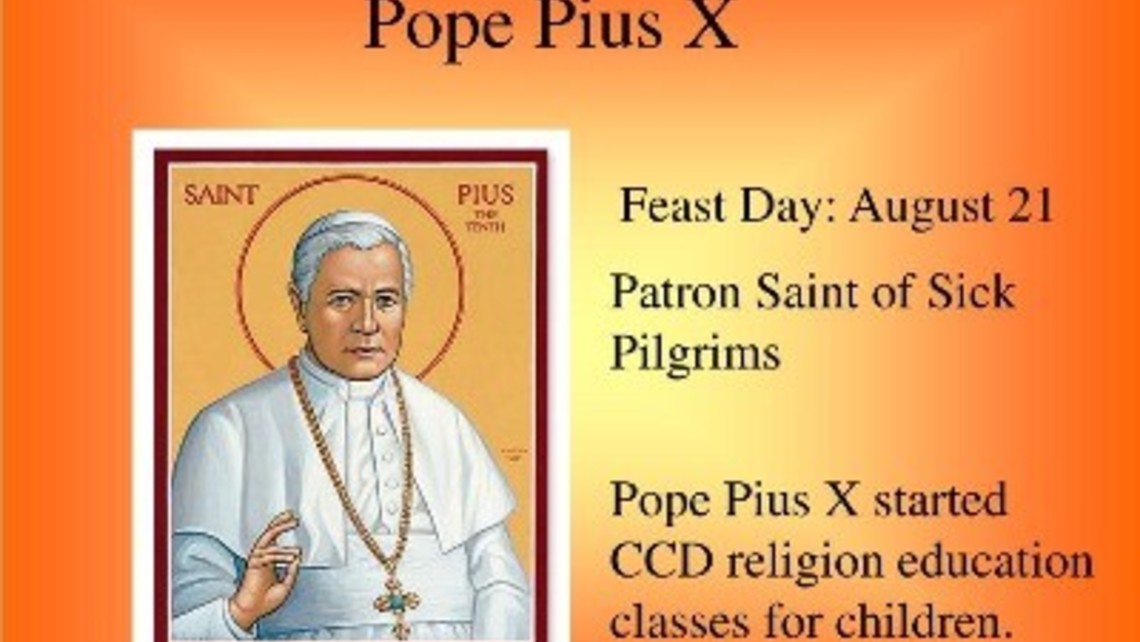 Pope Pius X is perhaps best remembered for his encouragement of the frequent reception of Holy Communion, especially by children.

The second of 10 children in a poor Italian family, Joseph Sarto became Pius X at age 68. He was one of the 20th century’s greatest popes.

Ever mindful of his humble origin, Pope Pius stated, “I was born poor, I lived poor, I will die poor.” He was embarrassed by some of the pomp of the papal court. “Look how they have dressed me up,” he said in tears to an old friend. To another, “It is a penance to be forced to accept all these practices. They lead me around surrounded by soldiers like Jesus when he was seized in Gethsemani.”

Interested in politics, Pope Pius encouraged Italian Catholics to become more politically involved. One of his first papal acts was to end the supposed right of governments to interfere by veto in papal elections—a practice that reduced the freedom of the 1903 conclave which had elected him.

In 1905, when France renounced its agreement with the Holy See and threatened confiscation of Church property if governmental control of Church affairs were not granted, Pius X courageously rejected the demand.

While he did not author a famous social encyclical as his predecessor had done, he denounced the ill treatment of indigenous peoples on the plantations of Peru, sent a relief commission to Messina after an earthquake, and sheltered refugees at his own expense.

On the 11th anniversary of his election as pope, Europe was plunged into World War I. Pius had foreseen it, but it killed him. “This is the last affliction the Lord will visit on me. I would gladly give my life to save my poor children from this ghastly scourge.” He died a few weeks after the war began, and was canonized in 1954.

Bishop, chancellor; d. Dec. 3–4, 1099. Osmund, or Osmer, was a Norman noble who went to England with his uncle, william i the Conqueror,... END_OF_DOCUMENT_TOKEN_TO_BE_REPLACED

A recent review of the belfry by the Diocese found much of the wood in the upper part of the Belfry was rotten and... END_OF_DOCUMENT_TOKEN_TO_BE_REPLACED

The continual use in recent months of the ‘Covid Guard’ spray had severely damaged the pews at St... END_OF_DOCUMENT_TOKEN_TO_BE_REPLACED