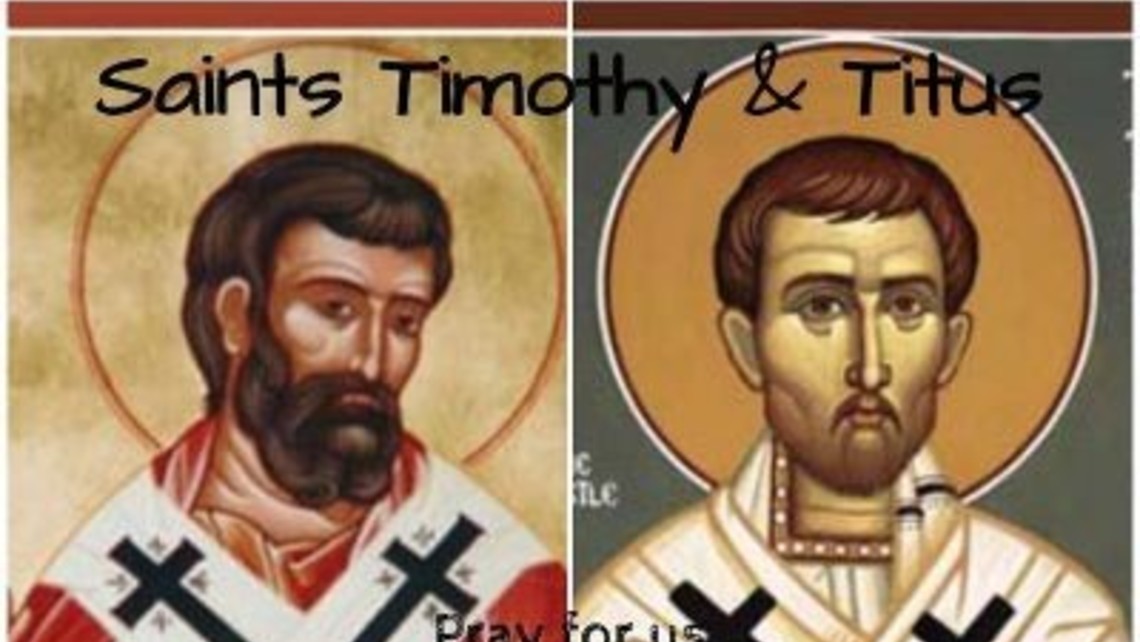 At the Council of Jerusalem
Although not mentioned by name in the Acts of the Apostles, Titus was recruited by Paul quite early on as a companion and was the occasion of controversy at the Council of Jerusalem. Since he was a Gentile, there was pressure from the hard-line Jewish party on Paul to have him circumcised. However, Paul firmly resisted this and eventually his view prevailed.According to tradition, Titus journeyed to Jerusalem and witnessed the preaching of Christ during the Lord’s ministry on earth. Only later, however – after the conversion of St. Paul and the beginning of his ministry – did Titus receive baptism from the apostle, who called the pagan convert his “true child in our common faith.”

Corinth
Titus appears again in Paul’s Second Letter to the Corinthians (2 Cor 2:13, 7:13 and 8:6): he was probably the bearer of an angry letter from Paul to the Corinthians, but he acted quite successfully as Paul’s ambassador in Corinth in rather difficult circumstances, sorting out disputes in the Corinthian church and organising a collection for Jerusalem.

Crete and Dalmatia
Paul sent a letter to Titus whom he left in Crete (Tit 1:5; See Acts 24:7-12). The letter gives him instructions to ordain “elders” and control the Cretans, of whom Paul did not have a very high opinion (Tit 1:12). In 2 Tim 4:10 Paul says Titus had gone on a mission to Dalmatia and he is especially venerated in Croatia.

Influence
Later tradition venerated Titus as the first bishop of the Cretan city of Gortyna. In 1966 the head of Titus was returned from Venice where it had been venerated at St Mark’s since the 9th century to the church of St Titus at Heraklion in Crete.
___________________________

From Lystra in Asia Minor
Paul took Timothy on as an apostolic travelling companion probably on the occasion of his second visit to Timothy’s home town of Lystra. The Christian community spoke well of him. His mother was a Jewess, who had converted to Christianity, but his father was a Greek. Contrary to his stance in the case of Titus, Paul had Timothy circumcised “on account of the Jews in the locality”.

At Ephesus
Timothy later accompanied Paul to Ephesus in Asia Minor (Acts 19:2, 1 Cor 16:10-11). As the presence of his name in the first verses of various epistles indicates (2 Corinthians, Colossians, Philemon and Philippians), he was closely associated with Paul in all his work and probably with his imprisonment in Ephesus.

In charge at Ephesus
In the Pastoral Letters Timothy is the one in charge of the church at Ephesus. Paul calls him “my true son in the faith” (1 Tim 1:2). Paul is concerned about his health and writes: “You should give up drinking only water and have a little wine for the sake of your digestion and the frequent bouts of illness that you have.”

Last letter
In his last letter probably written just before his death, Paul reminisces about Timothy’s grandmother Lois and his mother Eunice whom Paul would have met when he first took on Timothy as a companion at Lystra (2 Tim 1:5).

Relics
In the 4th century, Timothy’s relics were transferred to the Church of the Holy Apostles in Constantinople, which since 1461 has been replaced by the Fatih Mosque.

David is the patron saint of Wales and perhaps the most famous of British saints. Ironically, we have... END_OF_DOCUMENT_TOKEN_TO_BE_REPLACED

The Feast of the Chair of St. Peter commemorates Christ’s choosing Peter to sit in his place as the servant-authority of the whole Church.... END_OF_DOCUMENT_TOKEN_TO_BE_REPLACED

This year’s World Day of Prayer Service is to be held online! The... END_OF_DOCUMENT_TOKEN_TO_BE_REPLACED