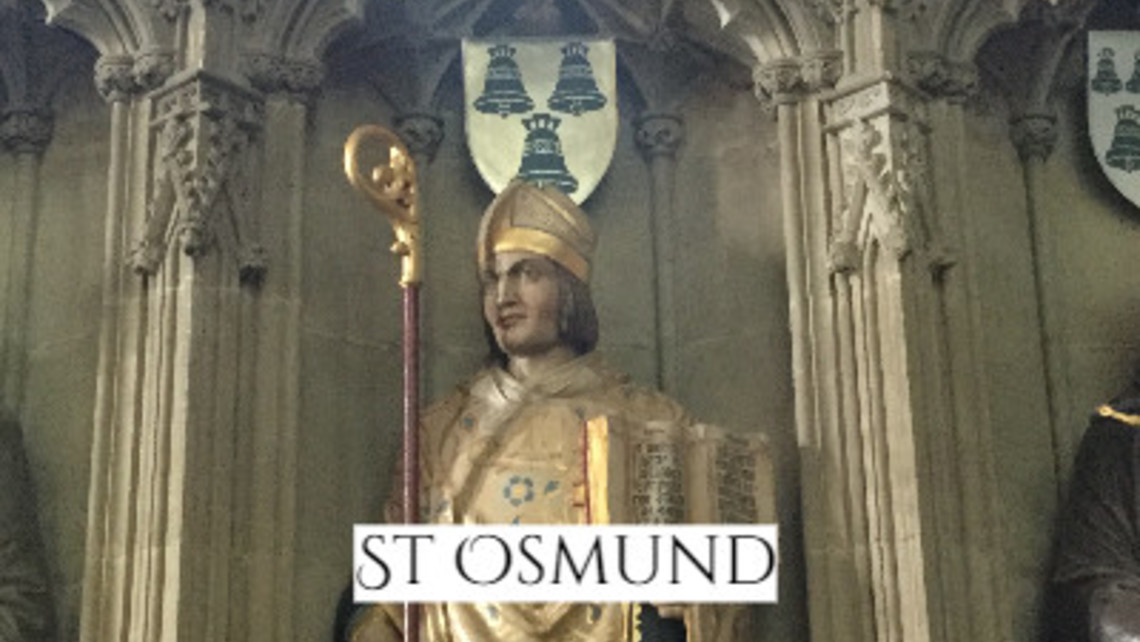 The son of a Norman count, Henry of Seez, Osmund came to England in the wake of William the Conqueror, his mother’s half-brother.  He became William’s chaplain until he was promoted to chancellor in 1072, obtaining in this office useful experience as an administrator.

In 1078 he succeeded Herman as bishop of Salisbury, a see that had been formed by uniting the dioceses of Sherborne and Ramsbury.  The episcopal seat for the new diocese was at Old Sarum, where the cathedral was built in the same enclosure as the royal castle.  Osmund completed and consecrated this cathedral and formed a chapter with its own constitution, which became a model of other English cathedrals.  The Sarum Use, a local variation of the Roman rite which became widespread in medieval England and on which the first Book of Common Prayer (1549) was based, has been associated with Osmund, but it reached its definitive form under Richard le Poore, bishop of Salisbury from 1198 to 1228.

Osmund was known for his administration and for his scholarship.  He had a great love for books and liked to copy them himself and to bind them with his own hands.  According to the chronicler William of Malmesbury, he was known not only for his learning but for his purity also, for his strictness with himself and with others, and for a commendable lack of avarice and ambition at a time when these traits were common in Church and State.  Osmund also promoted the veneration of Aldhelm, the Anglo-Saxon abbot of Malmesbury and bishop of Sherborne, accomplishing the translation of his relics to Old Sarum in 1078.  This event marked the end of the period in which Aldhelm and other Anglo-Saxon saints had been under attack by the Normans and by Archbishop Lanfranc.

Osmund’s appointment to the see of Salisbury did not bring to an end his part in the administration of the kingdom, and he took part in collecting the information for William’s Domesday Book.  He was present at the council of Sarum, when in April 1086 the results of the Domesday survey were presented to the king.

Osmund died on December 4, 1099, and was buried in his cathedral at Old Sarum.  In 1226 his body and its tomb were translated to the new cathedral of Salisbury, a few miles away from Old Sarum.  This translation is commemorated on July 16.

Alexander Briant (1556-1581) was a diocesan priest who entered the Jesuits just before he was executed. He studied at Oxford where one his... END_OF_DOCUMENT_TOKEN_TO_BE_REPLACED

During the pandemic, public worship was suspended for a time and there have been restrictions on parish life. As a result, people have... END_OF_DOCUMENT_TOKEN_TO_BE_REPLACED

Andrew Dung-Lac, a Catholic convert ordained to the priesthood, was one of 117 people martyred... END_OF_DOCUMENT_TOKEN_TO_BE_REPLACED