6 June – Corpus Christi – Most Holy Body and Blood of Christ

Today we are invited to reflect on our understanding of the presence of Christ in the Eucharistic species and what it means to our faith. This will not be difficult for us – we have been deprived for many weeks of receiving Christ in Holy Communion. It is possible that our appreciation of what we have currently lost has opened our eyes to how easy it is to take things for granted. Unlike many parts of the world where daily, or even weekly, opportunities to celebrate Mass are few and far between, we are fortunate to be able to receive the precious Body and Blood of our Lord on a regular basis. The Church gives us this feast so that we can reflect on the sacramental life of our faith. We know, more than ever, how important it is for us to be able to participate in the divine life of the Church and, although our reception of Holy Communion offers us a promise of eternal life, it also gives us the nourishment we need to follow and emulate the life of Jesus. In receiving the Body of Christ we are called to be the Body of Christ, to be bread for others and bread for the world, especially those who hunger and thirst not only for food but for justice. 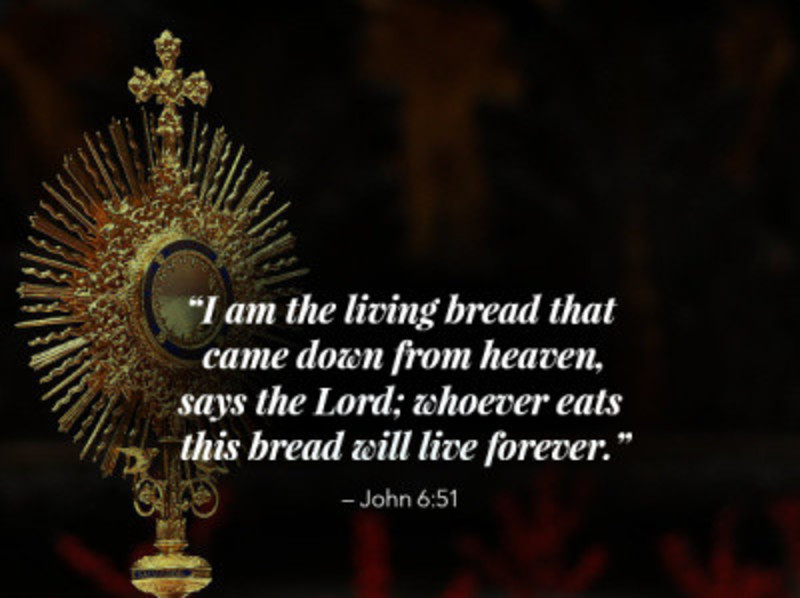 St. Juliana, a little-known Norbertine canoness from modern-day Belgium, spent much of her life advocating for a feast to honor and celebrate Christ’s real presence in the Eucharist and all the meaning it holds for the Church. St. Juliana was prompted to advocate for the feast in response to not only her own personal devotion to the Blessed Sacrament, but also in response to private revelations.

Interpreted later, in consultation with spiritual guides, the visions of St. Juliana that began when she was 16 years old indicated the necessity of a liturgical feast in honor of the sacrament of Christ’s Body and Blood. Given the culture of the early 13th century, she felt there was nothing she could do about instituting such a feast. However, she had confided in two individuals, other than a few members of her monastery, about the visions — both of whom proved to be helpful in bringing its establishment to fruition.

The young monk who served as St. Juliana’s confessor, John of Lausanne, collaborated with her to compose an office by which to celebrate this divinely inspired liturgical feast. Eventually their diocesan bishop approved the texts and authorised its celebration in his diocese in 1246.

Bl. Eva of Liège, an anchoress attached to the parish attended by St. Juliana and one of her confidantes, was instrumental in bringing the feast beyond its provincial origins after St. Juliana’s death. Bl. Eva had contacted Pope Urban IV with the request to celebrate the feast throughout the universal Church. The future pope originally was a priest of Liège and already had been familiar with St. Juliana’s visions and their meaning. And so, it seemed, the hand of providence was behind the pope’s 1264 declaration of the solemnity of Corpus Christi — the first universal feast to be imposed obligatorily by a pope. He assigned papal theologian St. Thomas Aquinas to compose new liturgical texts for the feast. This promulgation came at a time when scholastics debated the corporeality of Christ’s presence in the Eucharist, chief among the defenders of which was St. Thomas, who supplied the philosophical backbone of the Church’s Eucharistic doctrine by defining transubstantiation.