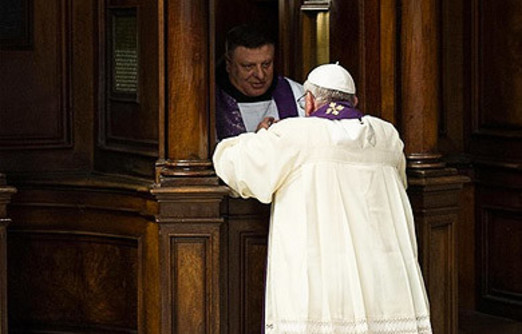 r which there is no substitute. It is a peace that flows from a certainty, rather than from an unsure hope, that our sins have been forgiven and that we are right with God.

Although many people fear it, tbut then come to love the sacrament of Reconciliation once they get over their nameless fears—fears which come from a misconception of what the sacrament really is.

The sacrament of Reconciliation is also known as Penance and Confession, among other names. 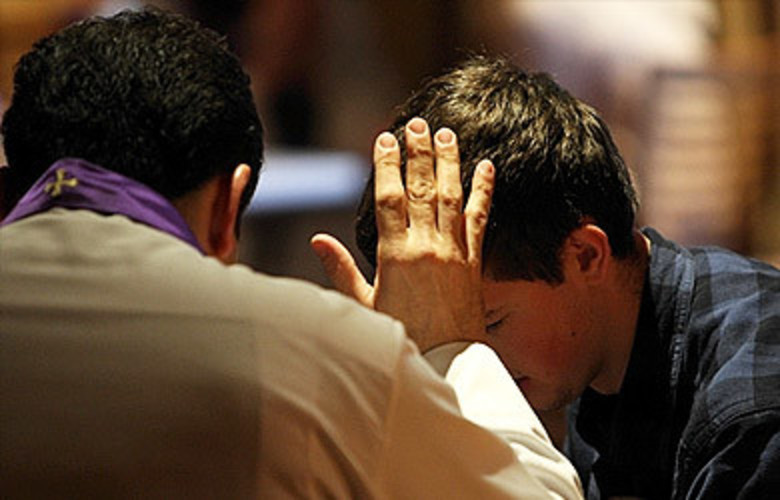 Although often called Reconciliation in common usage, the term “penance” best describes the essential interior disposition required for this sacrament.

In fact, there is a virtue of penance. This is a virtue by which we are moved to detest our sins from a motive made known by faith, and with an accompanying purpose of offending God no more and of making satisfaction for our sins. In this sense the word “penance” is synonymous with “penitence” or “repentance.”

Before the time of Christ the virtue of penance was the only means by which people’s sins could be forgiven.

Continuing the work of redemption 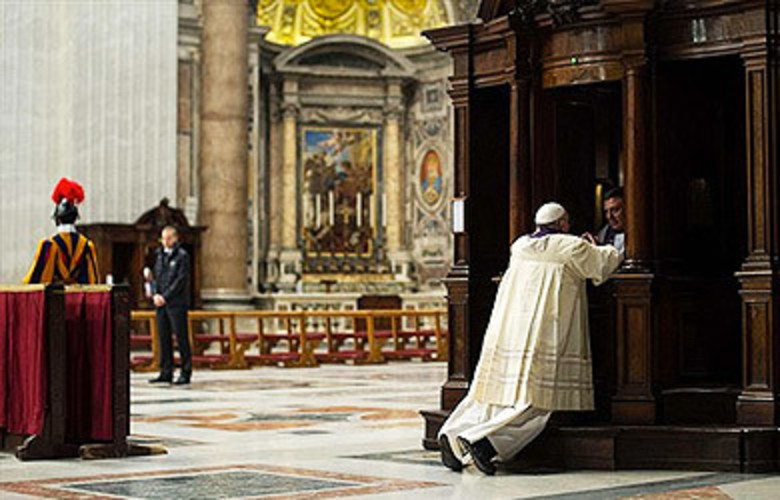 The sacrament of Reconciliation is a sacrament in which the priest, as the agent of God, forgives sins committed after Baptism, when the sinner is heartily sorry for them, sincerely confesses them, and is willing to make satisfaction for them.

By his death on the Cross, Jesus Christ redeemed man from sin and from the consequences of his sin, especially from the eternal death that is sin’s due.

So it is not surprising that on the very day he rose from the dead, Jesus instituted the sacrament by which our sins could be forgiven. 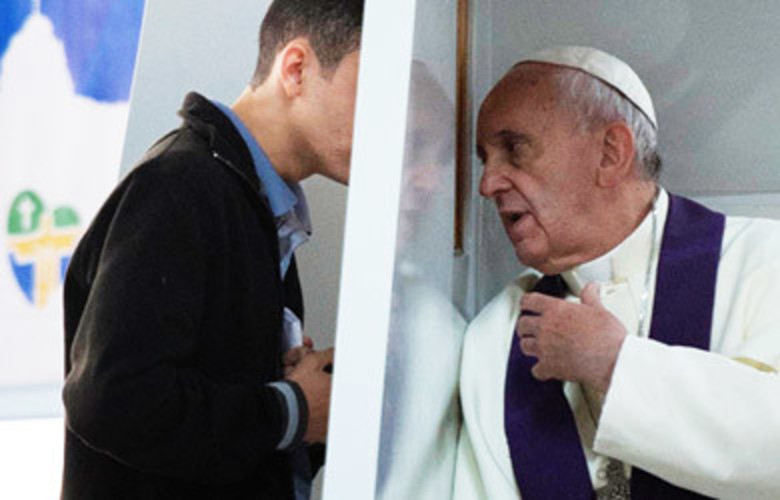 A power granted by Christ

It was on Easter Sunday evening that Jesus appeared to his Apostles, gathered together in the Upper Room, where they had eaten the Last Supper. As they shrank back in a mixture of fear and dawning hope, Jesus spoke to them reassuringly.

Jesus came and stood in their midst and said to them, ‘Peace be to you!’ And when he had said this he showed them his hands and his side. The disciples therefore rejoiced at the sight of the Lord. He therefore said to them again, ‘Peace be to you! As the Father has sent Me, I also send you.’ When he had said this, he breathed upon them, and said to them, ‘Receive the Holy Spirit; whose sins you shall forgive, they are forgiven them; and whose sins you shall retain, they are retained.’

To paraphrase our Lord’s words in more modern terms, what he said was this: 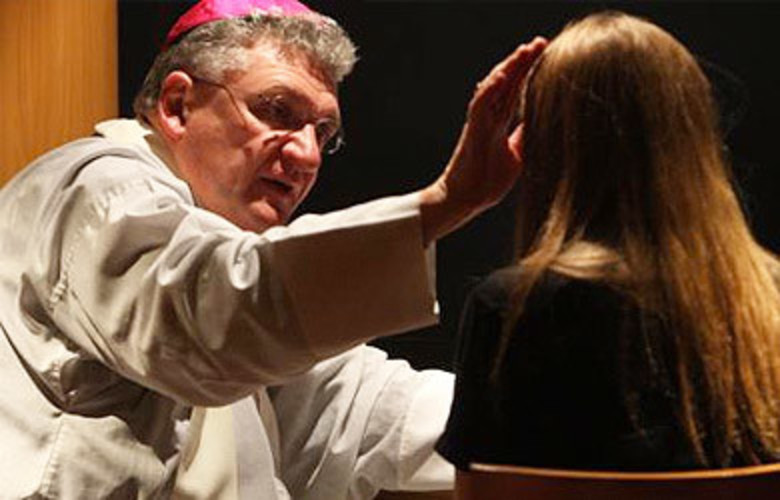 ses and commit grave sins after our Baptism. He knew that many of us would lose the grace, the sharing-in-God’s-own-life which came to us in Baptism.

Since God’s mercy is infinite and unwearying, it seems inevitable that he would provide a second chance (and a third and a fourth and a hundredth if necessary) for those who might relapse into sin.

A power of the priesthood

Jesus did not come upon earth just to save a few chosen souls, or just the people who lived on earth during the lifetime of his Apostles.

Jesus came to save everybody who was willing to be saved. He had you and me in mind, as well as Timothy and Titus, when he died on the Cross.

It is evident then that the power to forgive sins is a part of the power of the priesthood, to be passed on in the sacrament of Holy Orders from generation to generation.

It is the power which every priest exercises when he raises his hand over the contrite sinner and says, “I absolve you from your sins in the name of the Father, and of the Son, and of the Holy Spirit. Amen.” These are called “the words of absolution.”

It may be that at one time or another we have found the sacrament of Reconciliation a burden. Perhaps we even can remember an occasion when we said, “I wish I didn’t have to go to confession.”

But certainly in our saner moments we find Reconciliation a sacrament that we love, a sacrament we would not want to be without.

Just think of all that the sacrament of Reconciliation does for us!

First of all, if a person has cut himself off from God by a grave and deliberate act of disobedience against God (that is, by mortal sin), the sacrament of Reconciliation reunites the soul to God; sanctifying graceis restored to the soul.

At the same time, the sin itself (or sins) is forgiven. Just as darkness disappears from a room when the light is turned on, so too must sin disappear from the soul with the coming of sanctifying grace.

When received without any mortal sin on the soul, the sacrament of Reconciliation imparts to the soul an increase in sanctifying grace. This means that there is a deepening and strengthening of that divine-life-shared by which the soul is united to God.

And always, any venial sins which the penitent may have committed and for which he is truly sorry are forgiven. These are the lesser and more common sins which do not cut us off from God but still hinder, like clouds across the sun, the full flow of his grace to the soul.

The restoring or the increasing of sanctifying grace and the forgiving of mortal and venial sins—is there anything else that the sacrament of Reconciliation can do for us?

The temporal punishment due to sin is simply the debt of satisfaction which I owe to God for my sins even after the sins themselves have been forgiven. It it a matter of “repairing the damage,” we might say.

A simply example to illustrate this would be that of an angry boy who kicks at the table leg and knocks a piece of pottery off onto the floor. “I’m sorry, Mother,” he says repentantly. “I shouldn’t have done that.” “Well,” mother says, “if you’re sorry, I won’t punish you. But get down and pick up the pieces, and I’ll expect you to buy a new dish out of your allowance.”

Mother forgives the disobedience and absolves from the punishment—but she still expects her son to make satisfaction for his rebellious outburst.

It is this satisfaction which we owe to God for having offended him that we term “the temporal punishment due to sin.” Either we pay the debt in this life by the prayers, penances, and other good works which we perform in the state of grace, or we shall have to pay the debt in purgatory. And it is this debt which the sacrament of Reconciliation at least partially reduces, in proportion to the degree of our sorrow.

The more fervent our condition is, the more is our debt of temporal satisfaction reduced.

Additional graces to strengthen us

Finally, besides all its other benefits, the sacrament of Reconciliation gives us the right to whatever actual graces we may need, and as we need them, in order that we may make atonement for our past sins and may conquer our future temptations.

This is the special “sacramental grace” of Penance; it fortifies us against a relapse into sin.

It is a spiritual medicine which strengthens as well as heals. That is why a person intent upon leading a good life will make it a practice to receive the sacrament of Reconciliation often. Frequent confession is one of the best guarantees against falling into grave sin. It would be the height of stupidity to say, “I don’t need to go to confession because I haven’t committed any mortal sins.”

Jesus on the cross already has “done our work for us”. In the sacrament of Reconciliation we simply give God a chance to share with us the infinite merits of his Son.