Feast of Saints Philip and James 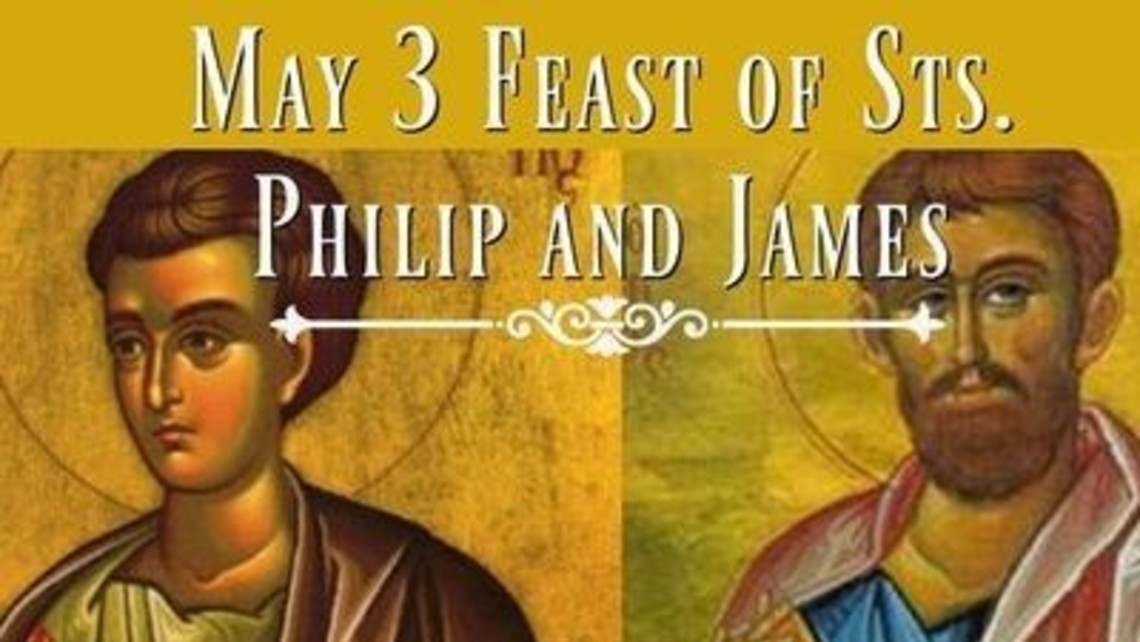 James, Son of Alphaeus: We know nothing of this man except his name, and, of course, the fact that Jesus chose him to be one of the 12 pillars of the New Israel, his Church. He is not the James of Acts, son of Clopas, “brother” of Jesus and later bishop of Jerusalem and the traditional author of the Letter of James. James, son of Alphaeus, is also known as James the Lesser to avoid confusing him with James the son of Zebedee, also an apostle and known as James the Greater.

Philip: Philip came from the same town as Peter and Andrew, Bethsaida in Galilee. Jesus called him directly, whereupon he sought out Nathanael and told him of the “one about whom Moses wrote” (Jn 1:45).

Like the other apostles, Philip took a long time coming to realize who Jesus was. On one occasion, when Jesus saw the great multitude following him and wanted to give them food, he asked Philip where they should buy bread for the people to eat. Saint John comments, “[Jesus] said this to test him, because he himself knew what he was going to do” (Jn 6:6). Philip answered, “Two hundred days’ wages worth of food would not be enough for each of them to have a little [bit]” (Jn 6:7).

John’s story is not a put-down of Philip. It was simply necessary for these men who were to be the foundation stones of the Church to see the clear distinction between humanity’s total helplessness apart from God and the human ability to be a bearer of divine power by God’s gift.

On another occasion, we can almost hear the exasperation in Jesus’s voice. After Thomas had complained that they did not know where Jesus was going, Jesus said, “I am the way. If you know me, then you will also know my Father. From now on you do know him and have seen him” (Jn 14:6a, 7). Then Philip said, “Master, show us the Father, and that will be enough for us” (Jn 14:8). Enough! Jesus answered, “Have I been with you for so long a time and you still do not know me, Philip? Whoever has seen me has seen the Father” (Jn 14:9a).

Possibly because Philip bore a Greek name or because he was thought to be close to Jesus, some gentile proselytes came to him and asked him to introduce them to Jesus. Philip went to Andrew, and Andrew went to Jesus. Jesus’s reply in John’s Gospel is indirect; Jesus says that now his “hour” has come, that in a short time he will give his life for Jew and gentile alike.

27 MAY FEAST OF JESUS CHRIST, THE ETERNAL HIGH PRIEST.

It’s not often in one... END_OF_DOCUMENT_TOKEN_TO_BE_REPLACED

St Dunstan was the son of Heorstan, Anglo-Saxon nobleman, born in the early 10th century near Glastonbury during the reign of King Athelstan.... END_OF_DOCUMENT_TOKEN_TO_BE_REPLACED

According to Acts 1:15-26, during the days after the Ascension Peter stood up in the midst of the brothers—about 120... END_OF_DOCUMENT_TOKEN_TO_BE_REPLACED