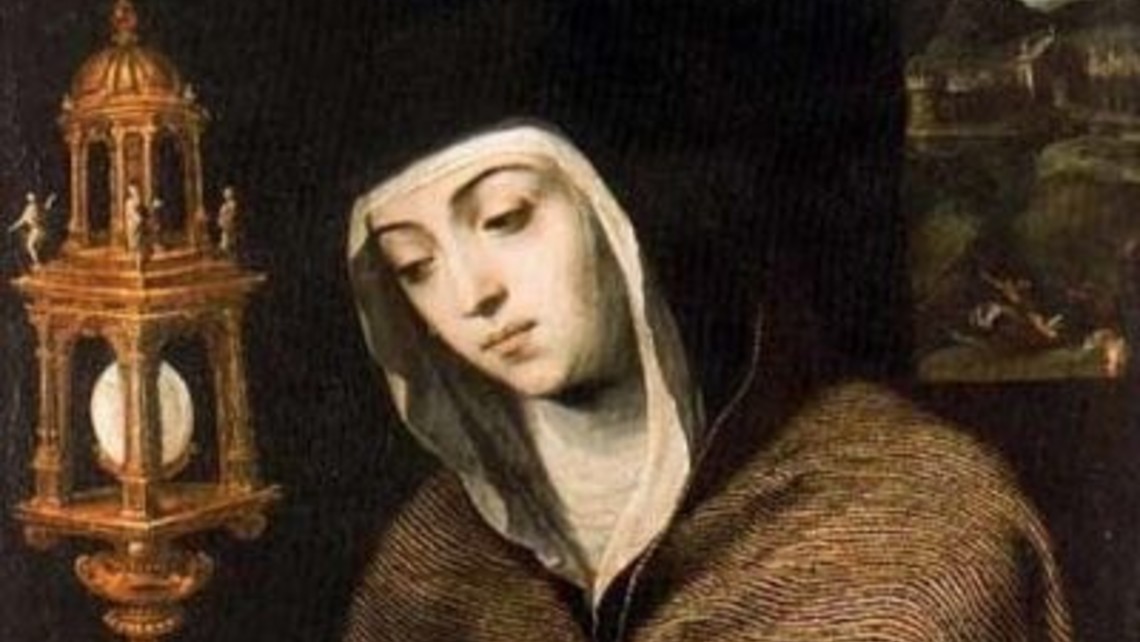 At the beginning of the 13th century, when luxury and sensuality held sway, St Francis of Assisi made his appearance, giving to men the example of a poor and penitential life. But God wished also to give the vain and pleasure-loving women of that period an example of contempt of the world's vanities. For this mission he chose Saint Clare, the daughter of a prominent and noble family of Assisi, born January 20, 1194.

Saint Clare's father was Favarone de Offreduccio, count of Sassorosso; her mother, the servant of God Ortolana, who died in the odor of sanctity.

Before the child's birth it was revealed to the mother that her offspring would be a brilliant light in the world. This light the mother detected in her daughter from her earliest years. Besides being favored with personal beauty, Saint Clare possessed a charming personality and rare qualities of mind. She was a favorite in the family, and hardly had she attained to young womanhood, when several suitors sought her in marriage. But her virtues surpassed the gifts with which nature endorsed her. She interested herself in the poor and frequently denied herself things so as to be able to give more to the poor members of Christ.

Saint Clare loved prayer, and it was her sweetest delight to surrender her heart to sentiments of ardent devotion before Jesus Christ in the Blessed Sacrament. Beneath her beautiful garments she wore a sharp penitential belt in order to honor the sufferings of Christ and to preserve herself a chaste virgin for His sake.

Clare was 18 years old when she heard St Francis preach in the cathedral of Assisi during the Lent of 1212. His words on contempt of the world and on penance, and particularly the holy example he set, so earnestly affected Clare, that she conferred with him and soon recognized that God was calling her to lead a life similar to his in the seclusion of a convent.

Saint Clare did not hesitate to carry out God's plans. Realizing that her family, intent only on a brilliant future for her in the world, would oppose her vocation in every way, she had to leave home in secret.

On Palm Sunday Clare went to church, dressed in her richest garments, to attend divine services. That night, attended by an elderly relative, she went to the little chapel of St Mary of the Angels, where St Francis and his brethren came to meet her with lighted candles in their hands. Before the altar she removed her beautiful head-dress, then St Francis cut off her hair and covered her head with a veil of common linen. In place of rich garments, she received a coarse penitential garb and was girded with a white cord. This was the way in which the mother and founder of the Poor Clares was invested on March 18, 1212.

For the time being, St Francis placed Saint Clare in a convent of Benedictine sisters. When Clare had successfully overcome the great opposition of her family, who had intended to force her to return home, her sister Agnes joined her in the sacrifice. St Francis arranged a little convent for them near the church of St Damian. There the number of consecrated virgins soon increased.

They served God in great poverty, strict penance, and complete seclusion from the world according to a rule which St Francis gave them as his Second Order. Clare was obliged in obedience to accept the office of abbess in 1215 and to continue in it for 38 years until her death. But her love for humility found compensation in the performance of the lowliest services toward her sisters. In spite of her great physical sufferings, she set her sisters a striking example of zeal in penance and prayer.

In the year 1240 an army of Saracens who were in the service of Emperor Frederick II drew near Assisi. They rushed upon the little convent of St Damian that lay outside the city and had already scaled the walls of the monastery. In mortal fear the sisters had recourse to their mother, who was ill in bed.

The saint, carrying the pyx containing the Most Blessed Sacrament, had herself carried to a convent window. There she pleaded fervently with the Lord of heaven in the words of the Psalmist (Ps 73:19), "Deliver not up to beasts the souls, that confess to thee, and shield thy servants whom thou hast redeemed with thy precious blood."

A mysterious voice coming from the Host said, "I shall always watch over you."

Immediately panic seized the besiegers. A ray of brilliant light which emanated from the Blessed Sacrament had dazzled them. They fell down from the walls and fled from the place. The convent was saved and the town of Assisi was spared.

After suffering from serious illness for 30 years, Clare felt that her end was drawing nigh. After she had received the last sacraments, she and one of her sisters beheld the Queen of Virgins coming with a large escort to meet her, the spouse of Jesus Christ.

On August 11, 1253, Saint Clare entered into the joys of eternity and on the following day her body was buried. Pope Alexander IV canonized her already in the year 1255.

Today the Church celebrates the feast of the Presentation of the Lord which occurs forty days after the birth of Jesus and is also... END_OF_DOCUMENT_TOKEN_TO_BE_REPLACED

On Feb. 6, the Catholic Church honors the 26 Martyrs of Nagasaki, a group of native Japanese Catholics and foreign missionaries who suffered... END_OF_DOCUMENT_TOKEN_TO_BE_REPLACED

is one of the most highly venerated virgin martyrs of... END_OF_DOCUMENT_TOKEN_TO_BE_REPLACED