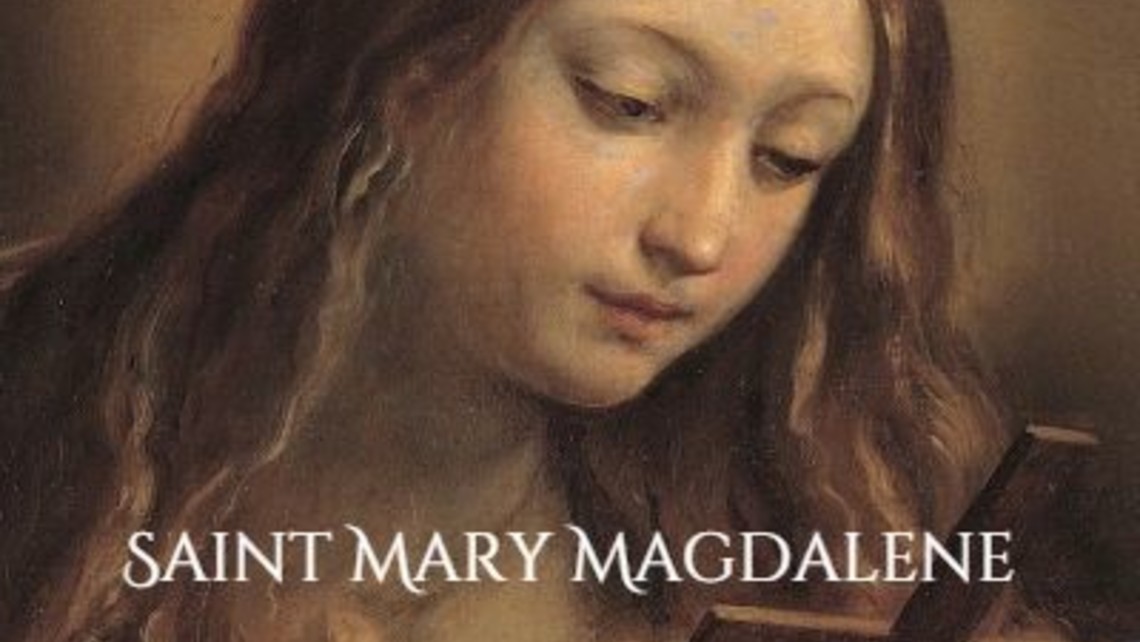 Except for the mother of Jesus, few women are more honored in the Bible than Mary Magdalene. Yet she could well be the patron of the slandered, since there has been a persistent legend in the Church that she is the unnamed sinful woman who anointed the feet of Jesus in Luke 7:36-50.

The feast of St. Mary Magdalene is considered one of the most mystical of feasts, and it is said that of all the songs of the saints, that of Mary Magdalene is the sweetest and strongest because her love was so great. That love was praised by Jesus Himself who said that because much was forgiven her, she loved much. Where she is buried, no one knows. Legend has her dying in Provence, France, in a cavern where she spent her last days, and her body resting in the chapel of St. Maximin in the Maritime Alps. Another has her buried in Ephesus where she went with St. John after the Resurrection. This latter view is more likely, and St. Willibald, the English pilgrim to the Holy Land in the eighth century, was shown her tomb there.

The true identification of St. Mary Magdalene is not quite clear. The Greek Fathers gave her a separate identity than Mary of Bethany, sister of Martha and Lazarus, but most Latin Fathers say she is the same Mary. From Dictionary of the Bible by Scott Hahn (Doubleday, 2009):

Tradition often identifies Mary Magdalene either with the sinful woman who anointed Christ's feet in Luke 7:36-50 or with Mary of Bethany, the sister of Lazarus and Martha mentioned in Luke 10:38-42 and John 11-12. By the sixth century A.D., figures such as Gregory the Great had begun to advance the notion that these two women mentioned in Scripture were one and the same person: Mary Magdalene, who hailed from Bethany and who had become a disciple of Jesus after leading a notoriously sinful life. This tradition explains why Mary Magdalene was revered for centuries as the "model penitent." From a biblical standpoint, it is not impossible that Mary Magdalene could be identified with either one or both of these two women, but decisive evidence is lacking and so it must remain uncertain.

She was the first recorded witness to the resurrection of Jesus, His most ardent and loving follower. She had stood with Mary at the foot of the Cross on that brutal Good Friday afternoon and had been by the side of Mary during these difficult hours. On Easter morning, she went with the other women to the tomb and it was there, in the garden near the tomb, that Jesus appeared to her. It was she who brought the news of the Resurrection to the Apostles, and Peter and John raced to the tomb to see what had happened.

She was from Magadala, a small fishing town on the Sea of Galilee, between Capernaum and Tiberias. She was known to be a "great sinner," a woman of the streets who heard Jesus speak of the mercy and forgiveness of God and changed her life completely. Her matter-of-fact witness to the Resurrection moved Peter and John to go and see for themselves: "I have seen the Lord and these things he said to me." Jesus had chosen her to bring the news to them and she simply told them what had happened.

She has always been the example of great love and great forgiveness, one of those close to Jesus who grasped the truth of God's love for human beings and spent her life bearing witness to that love.

The life of Anthony will remind many people of Saint Francis of Assisi. At 20, Anthony... END_OF_DOCUMENT_TOKEN_TO_BE_REPLACED

Due to the high Covid-19 rates, the decision has been made to postpone the Parish Get-Together due to take place at St Gregory’s hall... END_OF_DOCUMENT_TOKEN_TO_BE_REPLACED