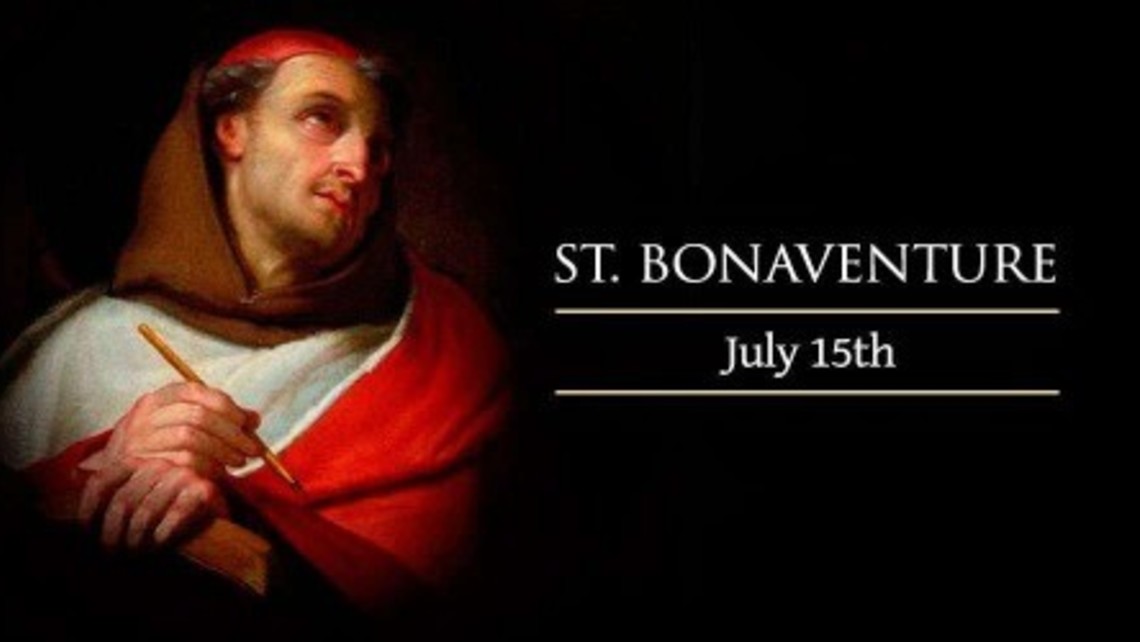 July 15 , marks the feast day of St. Bonaventure, who is called “The Seraphic Doctor” of the Church. St. Bonaventure is known for his leadership of the Franciscans and his great intellectual contributions to theology and philosophy.

St. Bonaventure was born in Bagnorea in Tuscany, Italy. He is widely believed to have been born in the year 1221, although some accounts say 1217.

Sources recount that in his youth, St. Bonaventure was cured of a dangerous illness by the intercession of St. Francis of Assisi. He went on to join the Franciscan Order of Friars Minor in 1243.

After making his vows, he was sent to complete his studies in Paris. He was taught first by Alexander of Hales, an English doctor and Franciscan, and later by John of Rochelle.

While in Paris, he became good friends with St. Thomas Aquinas, with whom he received the degree of Doctor. He also developed a friendship with St. Louis, King of France.

In 1257, St. Bonaventure was chosen to serve as the superior of the Friars Minor. In this position, which he filled for 17 years, he brought peace and order. His impact was so great that today he is sometimes referred to as the second founder of the Franciscans.

Taking on the position after a period of extraordinary expansion for the order, St. Bonaventure worked to preserve a spirit of unity. He calmed the threat of internal dissension that arose over differences in interpreting the message of St. Francis of Assisi. Central to this work was his understanding that the study of philosophy and theology did not oppose the call to poverty that was so central to Franciscan spirituality.

St. Bonaventure proposed a unified and collected text regulating the daily life of the Friars Minor. The text was accepted and ratified in 1260 by the General Chapter of the Order in Narbonne.

Wishing to present an authentic image of the life and teaching of their founder, he zealously collected documents about St. Francis of Assisi and heard testimonies of those who had actually known him. From this information, he compiled a biography of the saint that was adopted as his official biography by the General Chapter of the Friars Minor in 1263.

In 1273, he was appointed by Pope Gregory X as Cardinal and Bishop of Albano. The Pope also asked him to help prepare the Second Ecumenical Council of Lyons, an ecclesial event aimed at re-establishing communion between the Latin and Greek Churches.

St. Bonaventure worked to prepare the Ecumenical Council, but never saw its completion. He died on July 15, 1274, while the council was still in session. He was canonized in 1482 by Pope Sixtus IV.

In his General Audience on March 3, 2010, Pope Benedict XVI spoke about the life of St. Bonaventure. He called to mind the great works of literature, art, philosophy and theology that were inspired by the Christian faith during the time period in which the saint lived.

“Among the great Christian figures who contributed to the composition of this harmony between faith and culture Bonaventure stands out, a man of action and contemplation, of profound piety and prudent government,” Pope Benedict said.

The Pope called on the faithful to take note of “the central role that Christ always played in Bonaventure's life and teaching,” and to imitate the way in which “the whole of his thinking was profoundly Christocentric.”

On 19 July, the current legislative powers which assist the mitigations against the Covid-19 virus transmission... END_OF_DOCUMENT_TOKEN_TO_BE_REPLACED

Jesus Christ is a living, divine person who has accepted a... END_OF_DOCUMENT_TOKEN_TO_BE_REPLACED

John Vianney was born a peasant in Dardilly, France, in 1786. As a youth, John shepherded sheep on his father’s farm. It was during... END_OF_DOCUMENT_TOKEN_TO_BE_REPLACED